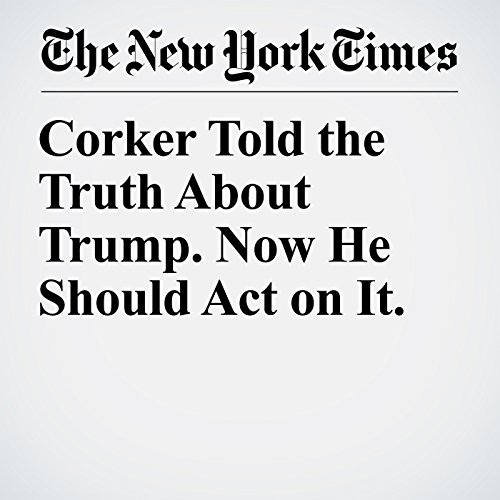 Over the past few months, the country has been in a foul sort of trance. Among people who work in politics, Republicans as well as Democrats, it is conventional wisdom that President Donald Trump is staggeringly ill-informed, erratic, reckless and dishonest. (He also might be compromised by a hostile foreign power.) But it’s also conventional wisdom that with few exceptions, Republicans in Congress are not going to stand up to him. America’s nuclear arsenal is in the hands of a senescent Twitter troll, but those with political power have refused to treat this fact as a national emergency. Thus, even though a majority of Americans consider the president unfit for office, a fatalistic sense of stasis has set in.

"Corker Told the Truth About Trump. Now He Should Act on It." is from the October 10, 2017 Opinion section of The New York Times. It was written by Michelle Goldberg and narrated by Kristi Burns.

Cosa pensano gli ascoltatori di Corker Told the Truth About Trump. Now He Should Act on It.