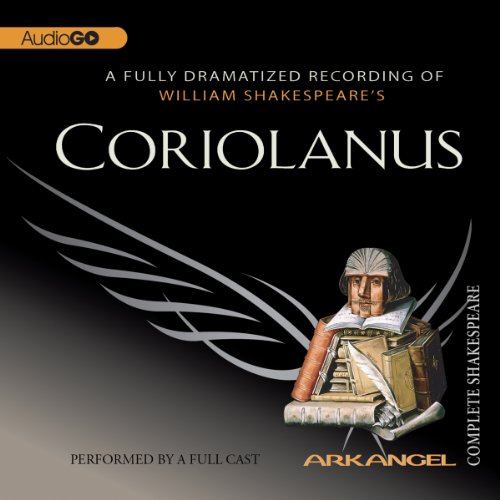 Rome is a city divided, nobility and common-people locked in mutual suspicion. The patrician Caius Marcius, later called Coriolanus, is Rome's greatest soldier, but his proud refusal to accommodate himself to the demands of the plebeians leads to banishment and death.

A Roman history as well as tragedy, Coriolanus is a complex and subtle exploration of the themes of absolution and compromise, both in the political world and in the life of the individual.

Let it be virtuous to be obsinate

“Let it be virtuous to be obstinate.”
- William Shakespeare, Coriolanus

I'm a sucker for a revenge play, so this one floats easily just on the heat generated by Coriolanus' anger. I remember being exposed to the Coriolanus story last year when I was reading Plutarch's 'Parallel Lives'* and again earlier this year when I was reading Livy's 'History of Rome, Books 1-2'. So, going into the play I was fairly comfortable with the basic story, but completely unprepared for Shakepeare's viscious tongue. Coriolanus, his mother Volumnia, and his friend Menenius all come packed with amazing lines. I don't think I'd go as far as T.S. Eliot and say it is superior to Hamlet:

Again, I still don't think it is superior to Hamlet, or as my wife would say: &quot;be a wee bit skeptical of the judgement of a man who published 'Old Possum's Book of Practical Cats'&quot;.

Still, there is something fierce and yet very human about Coriolanus. Having personally been raised among military men, the martial attitude that combines sacrifice with a large, sharp edge of condescension is still something one sees in high ranking soldiers. The play swims in raging waters of hyper-masculenity and militarism. I have yet to see either the Ralph Fienne's adaption or the Tom Hiddleston version. I'm sure I'll be able to talk my wife into watching either with me.

&quot;I have some wounds upon me, and they smart
To hear themselves remembered.&quot;
- Act 1, Scene 9

&quot;These are the ushers of Martius, Before him
He carries noise, and behind him he leaves tears.
Death, that dark spirit, in's nervy arm doth lie;
Wich, being advanced, declines, and then men die.&quot;
- Act 2, Scene 1

“I find the ass in compound with the major part of your syllables.”
- Act 2, Scene 1

&quot;Faith, there hath been many great men
that have flattered the people who ne'er loved them;
and there be many that they have loved they know not
wherefore; so that, if they love they know not why, they
hate upon no better a ground.&quot;
- Act 2, Scene 2

&quot;He covets less
Than misery itself would give; rewards
His deeds with doing them; and is content
To spend the time to end it.&quot;
- Act 2, Scene 2

&quot;Most sweet voices!
Better it is to die, better to starve,
Than crave the hire which first we do deserve.&quot;
- Act 2, Scene 3

“I think he'll be to Rome
As is the osprey to the fish, who takes it
By sovereignty of nature.”
- Act 4, Scene 7

&quot;There is differency between a grub and a
butterfly; yet your butterfly was a grub. This Martius is
grown from man to dragon. He has wings; he's more
than a creeping thing.&quot;
- Act 5, Scene 4

A Story That Keeps Repeating

First, my thanks to Ted (whom I follow) for alerting me to this series. It is truly a great find. It has set me on a course to explore the lesser known Shakespeare's.
Secondly, a quick note about what you might want to have handy if you want to do the same thing. Unlike a novel, it is not easy to follow the many voices unless you have the script handy. I struggled with this until I got the Letterpress Folio edition out. So, bonus, I get to hear a play I don't know so well and the sublime pleasure of following it in one of the best reproductions in print. If you don't have a Letterpress handy, any old version will suffice so you can follow who says what.
Thirdly, I found the production values to be a bit dated, but that was more than made up for by the full cast reproduction.
Finally, I thought the play itself a very interesting and topical one. It has so many ramifications for the present day lust for power, the spiral of power and corruption and the modern parable that "power corrupts, absolute power corrupts absolutely" (Acton). One can see how easily it might be adapted to more contemporary times. I have got the Raphe Fiennes movie on order now so that I test the theory.
I am looking forward to the next wet, winter day encounter with a lesser known William

The performance by ArkAngel always welcome and exciting. This lesser known Shakespeare play is entertaining and engaging.

The voice of Coriolanus is full of emotion. he sounds snotty when appropriate and furious when mad. The rest of the cast also performs wonderfully.