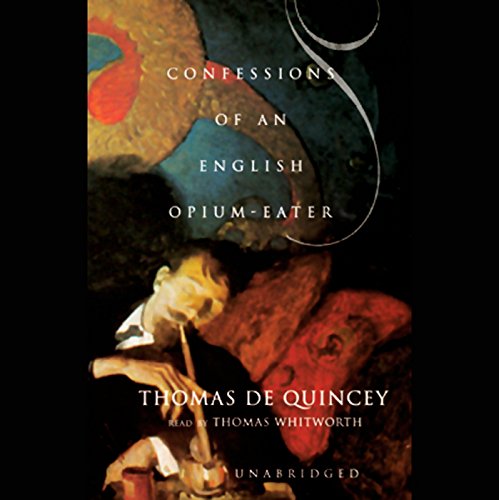 Confessions of an English Opium Eater

Confessions of an English Opium-Eater, Thomas De Quincey's best-known work, is an account of his early life and opium addiction, in prose that is by turns witty, conversational, and nightmarish.

The Confessions involve the listener in De Quincey's childhood and schooling, describing in detail his flight at age 16 from Manchester Grammar School, his wanderings in North Wales and London, and his experiences with opium, which began while he was a student at Oxford and developed into a lifelong dependency.

Said critic Grevel Lindop, "The drug that brings an 'assuaging balm' to the wounded heart extracts a price, alienating the hero from humanity and offering only intangible, though exalted, compensations."

Said De Quincey himself, when looking for relief from excruciating pain, "By accident I met a college acquaintance who recommended opium. Opium! Dread agent of unimaginable pleasure and pain! I had heard of it as I had of manna or of ambrosia, but no further: how unmeaning a sound it was at that time!"

Shocking, I suppose, when it was first written.

I'm glad I listened to this. The time went by quickly.

I liked the straightforwardness of De Quincey's description of his addiction.

I suppose the relative monotone of the narrator fit the straightforwardness of the message. I did sometimes wish the narrator had varied his delivery more, however.

Was Confessions of an English Opium Eater worth the listening time?

Yes. It was for me, because I had always wanted to 'read.' It's a short piece, so it goes quickly.

The sound quality was not of the best. Maybe it's not so much the narrator as the editor, but there were some skips.

The piece was probably shocking when it was first written. And what's interesting now is how De Quincey attempts to frame his addiction as a medical condition, which may have been a different approach back then. He humanizes his addiction, which may be a new thing for some readers.

De Quincey's prose style can be interesting. This was a new type of essay, apparently, and De Quincey was a forerunner of a certain type of 'personal essay.' I read the thing as much for that as anything and found it pretty much what I expected, over all. I enjoyed it and would probably enjoy it more a second time through.

Heaven is a place on earth

Before Burroughs, before Will Self, there was the 19th-century addict and intellectual Thomas deQuincey. His Confessions are part memoir, part homage to his favorite drug, part cri de coeur. As befits an addict's autobiography, it's a wildly uneven ride. Much of it is boring. Much is ecstatic, and as one who enjoys the occasional opiate myself, I found those parts worth the price of admission (which, since the text is free and short, is pretty low). Some of deQuincey's musings bespeak a frustrated intelligence. His comments on Kant and the economic theorist Ricardo stand in complex dialectic with his hedonism. Whether this book is for you will depend largely on the value you assign euphoria. The reader is good, the audio mediocre.

This is an interesting story. I'm not sure I'll get through it. The story is interesting and so is the narration but I don't know that I'm all that interested in the ins and outs of opium eating. I selected it because its a very famous story and many people put it on their lists of must reads. So its selection is part of my desire to catch up on "famous" reads to see why the books are so famous. So far, the "famous" books I've attempted have not been able to hold my attention. I have the same problem with the "classics" so it's probably just me and not the book itself.