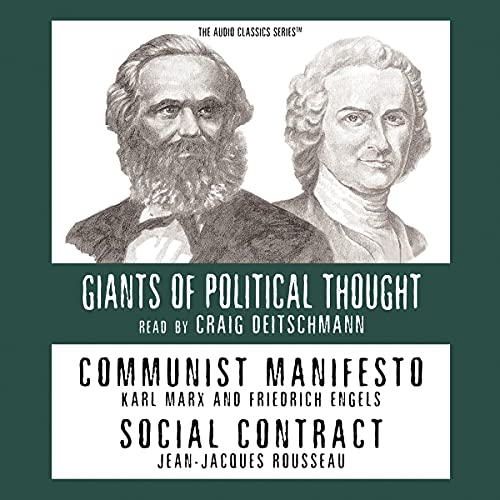 Communist Manifesto examines the theory and goals expounded by Karl Marx. Marx argues that history flows inevitably toward a social revolution, which will result in a society without economic classes. The influence on Marx of Hegel, Feuerbach, and other philosophers is examined, as is his friendship and collaboration with Engels.

Social Contract, by Rousseau, argues that people secure their liberty by entering into an implied contract with government. Rather than being protected by natural rights, their liberty is secured by the "general will", one of the most famous and troublesome ideas in political theory. This presentation explores Rousseau's concept of social order and its implications for individual freedom and the good of society.

I enjoyed these, both, very much. The producers -- Knowledge Products -- employ both quotes and analysis of the title works, along with the author's life experiences. This offers the listener an overview of the works, not simply a dry reading.

If you're at all interested in 18th-19th century political philosophy, give this a try.

The bad accents are unnecessary and distract from listening to what is actually being said.

Good but not as detailed as I expected

The first audiobook I listened to in this series is the one on Adam Smith (The Wealth of Nations). That set a very high bar against which this one falls short in the level of detail. 7.5 hours was spent treating Adam Smith alone but only a little over an jour for Marx?