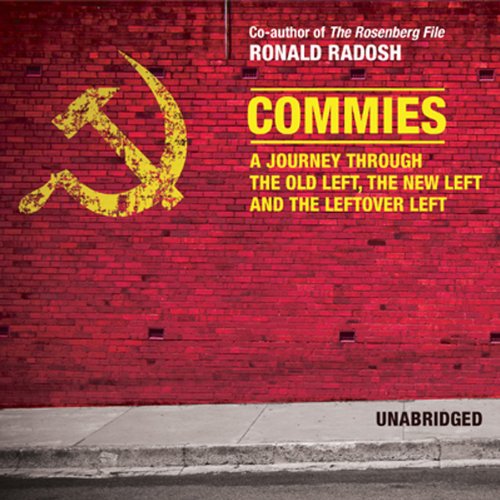 Ronald Radosh's earliest memory is of being trundled off to a May Day demonstration by his Communist parents. Radosh grew up in the parallel universe of American Communism. When he entered the University of Wisconsin in the late 1950s, he became a founding father of the New Left and was on the center stage during the 60s.

But if Commies is an intimate social history of the American Left over the past half-century, it is also a compelling story of a crisis of radical faith. In the early 80s, Radosh wrote the groundbreaking work The Rosenberg File, intending to prove the martyrs were innocent. But after examining government files, he became convinced of the Rosenbergs' guilt. As the publication of his book provoked attacks and blacklisting from his former friends in the Left, Radosh began to question his past allegiances.

Historian Radosh takes us deep inside his life on the Left with humor, irony, and nostalgia. The central Struggle is his own, between loyalty and intellectual honesty.

His Manhattan upbringing in the 1950's is a red Bizarro world, with communist teachers, communist family friends, and a communist summer camp. By the 1960's we're deep inside the anti-Vietnam War movement, a family feud of factionalism if there ever was one.

Next up feminism intrudes, and it's off to therapy. The therapy scenes are hilarious, but soon matters turn serious when Radosh encounters Cuba. Suffice to say Castro's Nurse Ratched handling of dissenters upsets the sweet kid inside him who came to the movement through Pete Seeger's folk songs.

Another course correction in Radosh's political journey comes when insiders tip him to certain facts about the Rosenberg case. He writes a book about it and, surprise surprise, he's suddenly getting a shunning like the one Bernard Goldberg got in his last days at CBS News. Well, both were treated better than Trotsky, right?

I won't give away the thrills and excitement of the various reactions to Radosh's articles in obscure left wing journals. Purchase "Commies" and you'll learn which celebrity of the left demanded a retraction of a book review in one such arcane organ. Call it sure proof that the original target of reaching the masses had shrunken to a niche of dozens.

Radosh is no Solzhenitsyn, and his witness to history may measure less than Whitaker Chambers'. Still, for the baby boomer generation he's an important voice, and an easy one to hear, regardless of political affiliation. Perhaps that's because Radosh's reader is the acclaimed audio dramatist Yuri Rasovsky. Every inflection captures perfectly Radosh's tone, true to a man who has ultimately been true with himself.