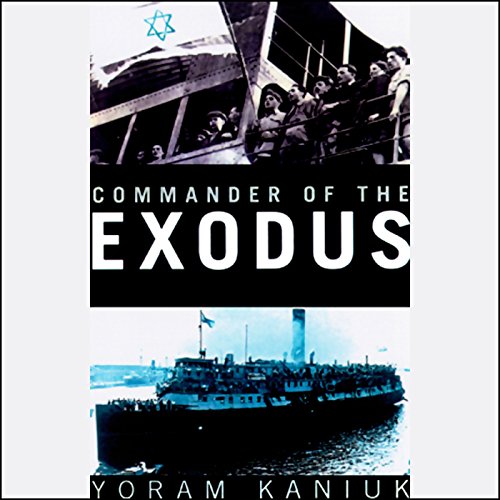 Commander of the Exodus

Hailed by the New York Times as "one of the most inventive, brilliant novelists in the Western world," internationally renowned Israeli writer Yoram Kaniuk turns his hand to nonfiction to bring us his most important work yet. Commander of the Exodus animates the story of Yossi Harel, a modern-day Moses who defied the blockade of the British Mandate to deliver more than 24,000 displaced Holocaust survivors to Palestine while the rest of the world (including the United States) closed its doors.

Of the four expeditions commanded by Harel between 1946 and 1948, the voyage of the Exodus left the deepest impression on public consciousness, quickly becoming a beacon for Zionism and a symbol to all that neither guns, cannons, nor warships could stand in the way of the human need for a home. With grace and sensitivity, Kaniuk shows the human face of history.

He pays homage to the young Israeli who was motivated not by politics or personal glory, but by the pleading eyes of the orphaned children languishing on the shores of Europe. Commander of the Exodus is both an unforgettable tribute to the heroism of the dispossessed and a rich evocation of the vision and daring of a man who took it upon himself to reverse the course of history.

"Masterfully describing both Harel's biography and the suffering and determination of the refugees, Kaniuk portrays an ugly episode in history and provides much-needed historical depth to contemporary political debates." (Publishers Weekly)
"Kaniuk not only gives readers a penetrating picture of Harel but also offers valuable insights into the Jewish struggle to create a homeland." (Booklist)

I was very interested to see a historical account of the coming-of-age, so to speak, of the nation of Israel. I gave this book a 3 because of the dryness of the writing. This story is like reading a history book; even the exciting battle scenes are stated matter-of-fact. I liked that the author brought in other current events of the time; other things that gave hints as to the mindset of the rest of the world. I enjoyed that the reader is an older gentleman. It gives the sound that the author, in his 80's, is narrating.
All in all, I found the content interesting, but the delivery very dry.

I love the story, but the narrator makes this book a bit of chore. The British accent isn't necessarily the problem, but his manner of speech is muffled in and of itself. Throw in the accent and it's just not a clearly worded performance.

The book itself consists of a great story that is not written in a great style. If you have an interest in Israel and things Jewish, the book is worth the read, but the scattered style and muffled narration will turn away the casual listener.

Interesting to a point

This book was interesting to me as it was a part of Israel's history that admittedly I was unaware of. From an insight into the events of the Exodus it was an interesting book. However, it is not an unbiased history. It is almost a romatic legacy written from a tribute to a hero (the captain). There is little information on the Britsh side of the story.

An interesting saga, but palls as history.