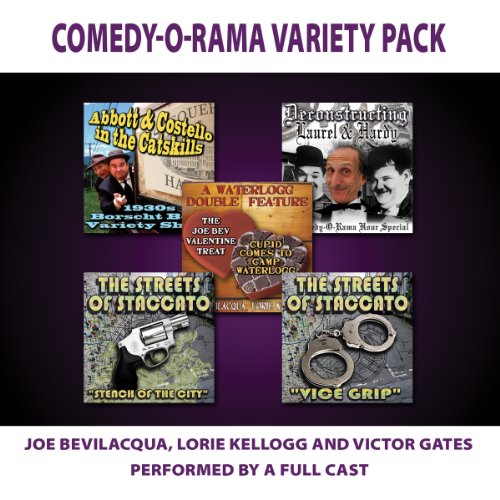 This variety pack includes comedy sketches and audiodramatizations that will keep you entertained throughout.

"Abbott & Costello in the Catskills": This is an authentic recreation of a 1930s Borscht Belt variety show recorded before a live audience in the Catskills. In this New Old-Time Radio Hour, Lou Costello (Bob Greenberg) follows Bud Abbott (Joe Bevilacqua) to the Catskills when Abbott is hired as sole Master of Ceremonies of a Borscht Belt variety show. Meanwhile, guest stars George Burns and Cab Calloway miss their train, forcing Abbott to sing and dance in their place!

"Streets of Staccato, Episode One: Stench of the City": In the first episode of Victor Gates' hilariously naughty '70s cop show with a modern sense of humor, Sergeant Staccato and his men battle it out with stinky pirates as Father Kelly from Belfast tags along. Craziness ensues as events lead to an epic showdown at Mr. B's Ballroom.