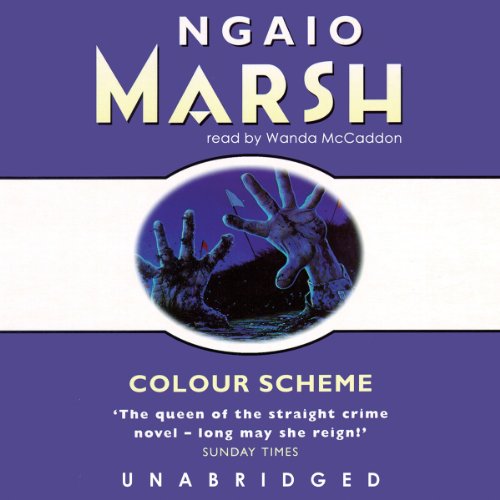 It was a horrible death - Maurice Questing was lured into a pool of boiling mud and left there to die. Chief Inspector Roderick Alleyn, far from home on a wartime quest for German agents, knows that any number of people could have killed him: the English exiles he'd hated, the New Zealanders he'd despised, or the Maoris he'd insulted. Even the spies he'd thwarted - if he wasn't a spy himself...
©1943 by Ngaio Marsh (P)2000 Blackstone Audiobooks

I love Ngaio Marsh although Colour Scheme isn't perhaps, my favorite because Chief Inspector Alleyn doesn't appear until the very end (in a way). But Ms. Marsh makes you live New Zealand in wartime and her depictions of the Maoris are spot-on! Ngaio Marsh certainly deserves to have a larger listenership, and I encourage Audible listeners to buy this and her other books. You won't be disappointed. The narrator, Nadia May, is also very good, her 'voices' enhance the production.

My major reason for writing this review is to alert Audible that there's a problem with the audio program production. At least 10 times during the book's course, a paragraph is repeated. While this is actually helpful if I've become distracted by driving concerns, it's a little disconcerting to hear it all again. This book needs to be re-edited.

It is 1943, deep in the midst of World War II, and Detective Chief Inspector Roderick Alleyn has been sent to New Zealand to look for spies when he gets a letter from Dr. James Ackrington that he is certain that a spy is inhabiting Wai-ata-Tapu Hot Springs, which are thermal springs with mud baths and mineral waters full of "alkalize, free sulfuric acid, and free carbolic acid gas" in Colour Scheme. Then the book shifts to the Hot Springs with the Claire family and Dr. Ackrington, along with their guests and local native friends. Dr Ackrington receives a letter from a doctor friend asking if the famous Shakespearean actor, Geoffery Gaunt, might be allowed to spend some time at the Hot Springs doing hydrotherapy. Gaunt got stuck in New Zealand when the war started, so he has spent his time raising money for the war effort. But now he needs medical treatment and has been recommended to visit Wai-ata-Tapu. Most of the Claire family are inclined to reject the visit of Gaunt, along with his secretary and manservant, but Colonel Claire reveals that he is in serious debt to Maurice Questing, the odious man who has been occupying a room at Wai-ata-Tapu, so they need the funds from Gaunt, though that will almost certainly be insufficient to save the springs for themselves. Thus they invite Gaunt to join them.

It doesn't take long before Gaunt takes up residence, leading to a visit by the Maori top royalty, Rua, a 100- year sort of uber- chief who began life as a warrior, then became a newspaper editor and then a member of Parliament before returning to the traditional Maori lifestyle in his old age. He wants to invite Gaunt and the other residents at Wai-ata-Tapu to join a special gathering among the Maori people. But then he brings up a further subject, that he has had reports that Questing has been searching for Maori artifacts on the mountain, something highly "tapu" to the Maori people. Questing has been boasting among certain groups that when he takes over Wai-ata-Tapu, he will set up a fancy resort with a curio shop. What's worse is that Questing has been seeking out the sacred axe of Rui, the oldest known chief, who is buried with this sacred axe. Dr. Ackrington announces that all of this secret night work on the mountain just gives him an excuse for sending signals to the Japanese in the nearby sea, since Dr. Ackrington believes strongly that the other man is a fifth columnist, an "enemy within."

The night of the concert, all the residents of Wai-ata-Tapu go, either by foot over the mountain filled with hot mud geysers or by car, to the Maori village. Everyone has a great time, especially when Gaunt brings the building to its feet with his recitation of the famous St. Crispin's Day speech from Henry V. But Questing still manages to make everyone around him angry, and they all go off in different directions, most to walk home. Then, as Dikon Bell, Gaunt's secretary, gets ready to drive the women home, they hear a piercing scream that takes Dikon up the mountain, where he runs into Septimus Falls, a new visitor to Wai-ata-Tapu, who thinks that Questing may have fallen into the geyser of boiling mud. The rest of the book tries to solve the mystery of what truly did happen to Questing, and was he a spy?

Colour Scheme begins a pattern in which Marsh experiments with different styles of narration. The book begins with a third person omniscient point of view but shifts about a quarter of the way to a mostly limited point of view from the perspective of Dikon, but it doesn't limit itself even to the limited viewpoint, shifting in and out of it to an omniscient angle.

It is also interesting how the war affects the content of the book. First, Alleyn is in New Zealand in the first place because of his war duties to look for spies, whether from the outside or from within. This served as a reminder that everyone must be wary even in locations seemingly afar from the action of the war. Second, the conclusion of the personal action ends with less certainty than most books, which usually end with an impending wedding or similar. Without creating a spoiler, though, I can't go into further details on this. But throughout the course of the book, we are constantly reminded that war is present amid everything.

The people at Wai-ata-Tapu live very comfortably next to the Maori people, the native people of New Zealand. This book spends a lot of time portraying the Maori from the region of this book. As it says, "White men move across the surface of
New Zealand, but the Maori people are of its essence." They have had to adapt to the modernization of a millennium in just a century. It is worth noting that the name Ngaio is actually our author's middle name and is of Maori origin. Though I believe Marsh was not of the Maori people, she clearly had strong sympathies for the group. It is important for readers to separate racist comments made by individual characters from the actual opinion of the author. In this case, some characters do say things disrespectful to the Maori culture, but they do not represent the attitude of the author, as her complaint against the ways the colonizers have harmed Maori culture shows.

As I look through reviews, I see many people who do not like the performance of Nadia May in the audio versions. I, however, really like Nadia May, the nom de vox of Wanda MacCaddon, another name she records under. In fact, my mother and I will always choose Nadia May over any other narrator if a book has multiple offerings. To illustrate my pretence of this narrator, I own 30 titles performed by her, even of books with other narrators as selections. I like hearing May's pleasant voice as she reads a book to me. Further, she uses effective pacing, neither too fast or too slow. She did a great job voicing the Maori people, especially in their native wails. Does anyone notice a pattern here? I just really like Nadia May!

Colour Scheme is a really creative, fascinating book, but because we don't actually meet Alleyn until the very end of the book, I do not recommend it for someone new to the works of Marsh. I love the taste I get of northern New Zealand, which is so different from the taste I got of other parts of the island country in Vintage Murder, Died in the Wool, and Photo Finish, each of which highlights a different part of the country. The background of the war just adds further intrigue to an already interesting plot. But because of the absence of Roderick Alleyn for almost the entire book, I lower my five stars to four.

This just wasn't something I could get into. I gave up after several hours. It might mean more to some one with more awareness to the New Zealand setting. The narrator was okay but, not captivating. I agree with the other reviewer about some paragraphs being repeated.

Charming characters, dialogue, and intriguing denouement - although the rank and brazen racism was jarring by today’s somewhat enlightened standards. At least Marsh did not designate one of her “half breeds” as the perp.

Enjoyed it from start to finish; "in this book" is just a fun place to be. (Bonus points for a New Zealand setting. I'm partial to that.)

The “accent” given to supposed maori in this story is vaguely East Asian (Indian), and not at all what maori people sound like. (They don’t have a discernible accent, apart from other kiwis) It’s so grating I could not continue listening.

One of my favorites from Ngaio Marsh

For fans of this genre, this is a refreshing and novel take, set in Marsh‘s New Zealand homeland. The cast of characters is extraordinarily broad—in turns naive, jaded, wily, bumbling, genteelly poor, obliviously rich, and everything in between. Rather than turning into a confusing hodgepodge, the characters are well-differentiated, three-dimensional and seem to fit likes the gears of a machine into their little world. The presence of each is believable and serves a purpose.

The story gives ample evidence of Marsh‘s love for her native country, as well as her understanding of the complexities of its colonial history. She illustrates, but never preaches.

The mystery in itself is a good one, with suspects aplenty and a unique (and horrifying, but not gory) cause of death.

Nadia May is, as always, an excellent narrator and manages the accents quite well, in my opinion. I also like now she narrates men—that is to say, without trying to go into some toad-like baritone.

I’ve listened to this one three times over the last 10 years or so and enjoy it every time.

Excellent story, set in wartime NewZealand with a colourful cast of characters. Nadia May's narration is faultless. This is one to listen to again.

I love Ngiao Marshs books. This is no exception. Overall the narration is good, but the reader just cannot do accents to save her life! She should give up trying and just use her own rather pleasant voice.

This is a 'duvet read' best listened to wrapped in that duvet with a cup of tea, a couple of rich tea biscuits and nothing else to do.