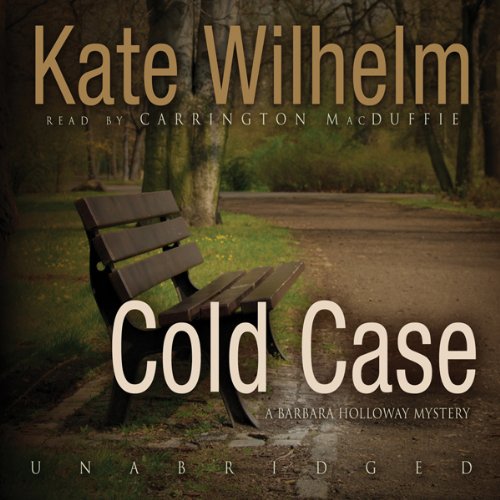 Controversial author and scholar David Etheridge is not the kind of company an aspiring politician wants to keep. But ambitious senator Robert McCrutchen has a history with Etheridge that he's desperately trying to keep under wraps: 22 years ago, both men were investigated in the still-unsolved death of a young coed.

When Etheridge returns to Oregon, McCrutchen is his grudging host - until the senator is found shot dead. Now, Etheridge is once again suspected of murder, only this time, with the cold case reopened, he's facing a double charge.

Attorney Barbara Holloway must battle both the prosecution and the court of public opinion, which has already tried and convicted Etheridge for both murders. As the pressure mounts, Barbara must risk her own life to protect a client and preserve justice.

I can not believe I listened to all of this book

This book was awful with occasional flashes of adequacy. The story seemed forced,the dialogue was flat, and the characters were barely believable. I won't buy another book by this author.

A little hard to follow at first but picks up

I'm not crazy about the reader, she over-enunciates and doesn't add much to the story. The basic premise requires one to suspend reality a bit as the story starts from a party held at the home of one obnoxious college student who nobody seems to like much yet he becomes a successful politician who no one hates. The other 2 primary story subjects weren't friends or big fans of the future politician so why would they go to a party at his parents house? For the free beer? Hard to say. Once you suspend reality for that issue it is an interesting mystery. Kept me entertained and thinking for a little while.

Figured out the who-dunit, before the 2nd chapter. No twist-or-turns just listened until it was finally over. Reader was good.
Bought a couple of other books from Kate Wilhelm, hope they aren't all this predictable.

This is the first time I listened to this author. Enjoyed the storyline and the charaters. I will be seleting more of her books. I am excited to have found this Author.

Kate Wilhelm has lost her way

I have purchased and listened to many Kate Wilhelm books. She is capable of writing a good story. However, each book now becomes more of an agenda driven book of the worst kind - one which is so obvious and unimaginative as to try to cram a political philosophy down the gullet of the reader. I don't mind an author using a good story to make a point, but Ms. Wilhelm abandons the story at some points, and inserts meaningless characters in at other points just to pound the reader with her political philosophy. She is about as subtle and creative as a sledge hammer to the face. I will not waste any more audible credits to be preached to in such an obvious and non-creative way.

What made the experience of listening to Cold Case the most enjoyable?

Another winner for Wilhelm. Barbara Holloway does it again. Can't go wrong with the Holloway series.

I can't believe I listened to the whole thing - the mystery wasn't a mystery, it was evident from early in the story who the killer was. I didn't find the characters well developed or interesting. I'm sorry I wasted my time and will not buy another by this author.

Good Barbara story. Pretty straight forward. As both Kate Wilhem and Anne Fields have passed it is a difficult time to criticize any parts.

Fun & exciting trip to Belize!! Finding herself in a tangle of drugs & money!

I always enjoy Kate Wilhelm's books. The story is always intersting with good solid characters and the narration is good.