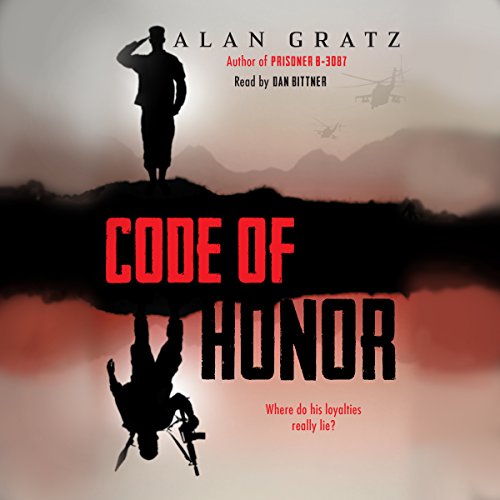 A timely, nonstop action-adventure about the War on Terror - and a family torn apart. When 17-year-old Iranian American Kamran Smith learns that his brother has been labeled a terrorist, he knows something isn't right. In a race against time, it is up to Kamran to prove his brother's innocence, even as the country has turned against him and his family.

With the help of a ragtag team of underground intelligence professionals, Kamran must piece together the clues and the codes that will save his brother's life - and save his country from possibly the largest terrorist attack since 9/11. Acclaimed author Alan Gratz takes listeners on a nonstop action-adventure journey through the emotional, political, and cultural landscape of the War on Terror while weaving a poignant tale of two brothers.

If you can suspend your thoughts about how realistic this is, the story is great and celebrates the bond of siblings, explores patriotism and what that means, and exposes how easy it is to believe the media. Perfect for YA, and the action-packed story had me eagerly listening to find out what would happen next!

Great JBA NOMINEE this one has my vote!! great book for middle, high and adults! Love the honor code!!

Such an amazing book. My 13 year old son was hooked and couldn’t stop listening... neither could I. Great ending too. Downloading another war one now. Your books are great!

The twist were on point. It was Kameron and Darious againt the world. i also like how had sports in it.🔥🖒🔥🖒🔥

The chapters in the app do not match up with the audio.

The chapters in the app do not match up with the audio. I don’t recommend.

A Code To Live By

This is a riveting faced-paced tale of the familial bonds which prove greater than any evil. The story of terrorism with its twists and turns is truly engrossing and a topical read for the times in which we live.

coming of age story with a modern twist

my only problem with this book is where the story fails to be realistic. more than once I found myself unable to suspend my disbelief. other than that, really captivating story that will keep you listening!

This book was so amazing and great. I couldn’t stop listening. I highly recommend this book for people who like all the police stuff and mystery’s.

One Of his best

This in my opinion was one of Alan’s best books, wanna know why? Read it, you won’t be disappointed