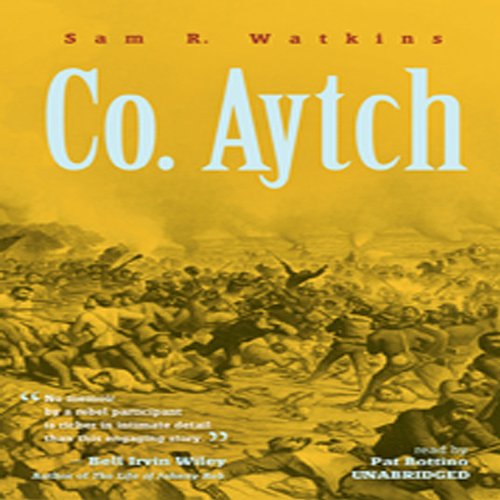 Early in May 1861, 21-year-old Sam R. Watkins of Columbia, Tennessee, joined the First Tennessee Regiment. He fought in all of its major battles, from Shiloh to Nashville. Twenty years later, with a "house full of young 'rebels' clustering around my knees and bumping about my elbows," he wrote the remarkable account of "Co. Aytch," its common foot soldiers, its commanders, its Yankee enemies, its victories and defeats, and its ultimate surrender on April 26, 1865.

Co. Aytch is the work of a natural storyteller who balances the horror of war with his irrepressible sense of humor and his sharp eye for the lighter side of battle. Among Civil War memoirs, it stands as a living testament to one man's enduring humanity, courage, and wisdom in the midst of death and destruction.

©2003 Sam R. Watkins (P)1995 Blackstone Audio, Inc.
"Anyone who wishes to hear a Southern view of why they fought should hear Watkins....[T]his work is moving and always fascinating because it is a great text penned by a man who has seen the spectrum of human cruelty, horror, and kindness." ( AudioFile)

I have listened to this book three times now. It is an amazing look into the the story of a soldier who fought in many important battles of the Civil War. But apart from history it tells the human side of war and although Watkins tells of horror and suffering he also fills the narrative with clever anecdotes and odd situations of the people he served with. There is much opinion of the abilities of the various leaders he served under. The story is filled with colloquilisms from the Civil War which I enjoyed. The narrator of this version, although not having a Southern accent, did a fantastic job as well.

This is one of the best narratives of a Civil War soldier (cited extensively by Ken Burns' documentary by the way) and it is a must have.

I had read this years ago and recently stumbled across it in Audible and bought it and I am glad I did. The book itself is outstanding. Watkins is a gifted writer who is able to describe both the horror and humor of war through the eyes of a private. Most history narratives of battles and war are told by Generals and their staff - so this book is really different. The only slight downside to this was that the narrator was a little too dour and wasn't able to capture how funny some of the things that occur during the course of a war are. Well worth the credit

Story of a Private Soldier

If you excised every passage when Watkins provides his disclaimer that he is "just a private soldier" and that he is not giving a full history of any particular event, but rather his memories of his personal experience, the book would be a quarter its actual length. A good first-had recounting of the Confederate experience, but in my opinion, Barry Benson's Civil War Book does a much better job and is much more engaging (also, without the constant pace killers of disclaiming that he is just a private soldier and that his view is not representative). Additionally, Benson has the advantage that he kept some form of a diary during the experience, which Watkins seems to base his recollections exclusively upon memory. The result, for Watkins, is a deficit of detail and a blending of events. The Watkins book is a very interesting historical artifact, but if you want a single example of a Confederate war memoir, your time is better spent with Benson.

The Civil War According to a Regular Guy

Yes, because it's like listening to a guy you know tell a story. He talks about everyday stuff that you won't hear about in the history books. Like the time they had to destroy a big cache of food, and each took a slab of bacon and stuck it on their bayonet to carry with theme.

What was one of the most memorable moments of Co. Aytch?

Noting stood out, all good.

No, just found it interesting.

Nope. Listen to it - pretty interesting.

Worth the effort to listen to!

Sam Watkins has kindly given us insight into the thoughts and experience of a Confederate soldier. I can't imagine how he managed to survive the hardships, deprivations, battles and defeat!

I found this a really worthwhile book to listen to and was even more fascinating towards the end. The style of writing is very different from anything else I'm used to. The narration could be better tho!

This is an interesting tour through the Western Theater of the War Between the States from the view of a 1st Tennesse infantryman. Apparently the author has a superior guardian angel because he is in the thick of it from start to finish. Assuming it's true it's an amazing accomplishment. When you hear the descriptions of the thick minie balls and the grape shot booming it makes you wonder what these people were doing. These people were CRAZY - all of them - blue coats and Johnny Reb. After awhile I began to gain a deeper understanding of the pace of the war, the automatation of the war machine of the Yankees, and the degree of "regimentation" that was instituted on both sides. I found the first hand accounts of the Confederate defense from Chattanooga to Atlanta very insightful. He got me doing some arm chair generaling and thinking of better ways to deal with the Blue Coat armies moving South out of Chattanooga. Personally I think the war was over in 1862 when the Federals took full control of the Mississippi - but revisiting these campaigns on such an "on the ground" view makes me ponder what may have been salvaged if handled a bit more dynamically. This narrative also helps to illuminate the "mass" nature of the Yankee hoarde; for me Cold Harbor is no longer some example of extreme slaughter but is what became the measure of what the North was willing to use up. Fredericksburg, Cold Harbor, the Bloody Angle, the Kennesaw campaigns saw the Blue Coats march over and over to their deaths in doomed or very expensive assaults. Now I am suspicious of the "offical" 600,000 killed in this war - I now believe it to be LOTS more. I may have to go look into how those numbers were established - I'm curious now.

Should have been a southern narrator

This is not intended to cast a dim light on the narrator. But this should have been narrated with an authentic southern dialect. Moreover, narrators should do a little research when encountering words they are unfamiliar with. Nothing worse in a narration than when something close to home is pronounced incorrectly. It just kills all believability for the listener.

Where does Co. Aytch rank among all the audiobooks you’ve listened to so far?

This is a great book written from a poor, footslogging infantryman that lived the horrors of the war in the 1st Tennessee Regiment of the Confederate States Army. This isn't about the grand movement of armies and where and when they fought, but rather the story of one man, in one regiment, in one army, that did, as Sam Watkins said, "the fighting and the killing."

What other book might you compare Co. Aytch to and why?

Rebel Private Front and RearHardtack and CoffeeSimply because these two books are written from a common soldier's point of view.

Would you be willing to try another one of Pat Bottino’s performances?

No. The reading was so slow, so plodding, and without emotion that it LITERALLY almost put me to sleep...twice. And once I was driving!

Where Sam Watkins said, "I always shot at privates, because it was the privates doing the shooting and the killing."

What was one of the most memorable moments of Co. Aytch?

Some interesting experiences by the author.

Tragic, poignant, mundane, humorous - all sounded the same by this guy. Also, totally wrong accent. Couldn't they have found someone with a southern accent to read the book. After all this is the classic memoir of a private soldier from the Confederate side.

A very good first person account of the Civil War

Would you listen to Co. Aytch again? Why?

Yes, because it is the best book of its kind I have listened to.

What other book might you compare Co. Aytch to and why?

There are one other books to compare it to.

What does Pat Bottino bring to the story that you wouldn’t experience if you just read the book?

He captured the emotion of the War both the good and the bad.

No, the entire book was very moving.

This is the first Civil War account that have either read or listened to that told the how the foot solider felt about the Generals that commanded them. That in itself makes this a one of a kind book.