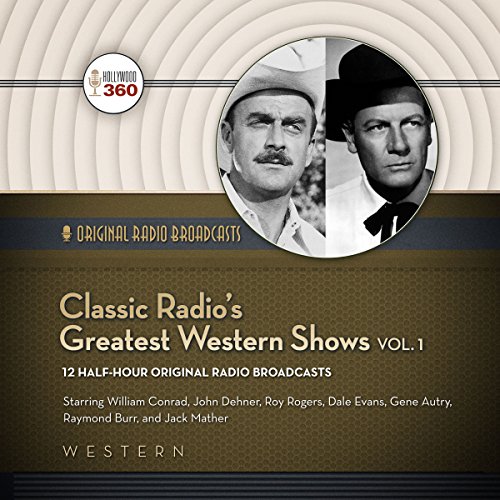 This collection contains 12 of the greatest Western shows ever broadcast during the golden age of radio, including many first episodes from their series. You'll hear William Conrad as Marshal Matt Dillon on Gunsmoke, John Dehner as the man called Paladin on Have Gun - Will Travel, Roy Rogers and Dale Evans on The Roy Rogers Show, Gene Autry on Gene Autry's Melody Ranch, Raymond Burr as Captain Lee Quince on Fort Laramie, and Jack Mather in The Cisco Kid; plus the Western favorites The Adventures of Red Ryder, Tales of the Texas Rangers, Wild Bill Hickok, Frontier Gentleman, Luke Slaughter of Tombstone, and Frontier Town.

In this incredible collection, you can relive 12 of the best classic radio Western shows from yesteryear with the legendary stars who made them great.