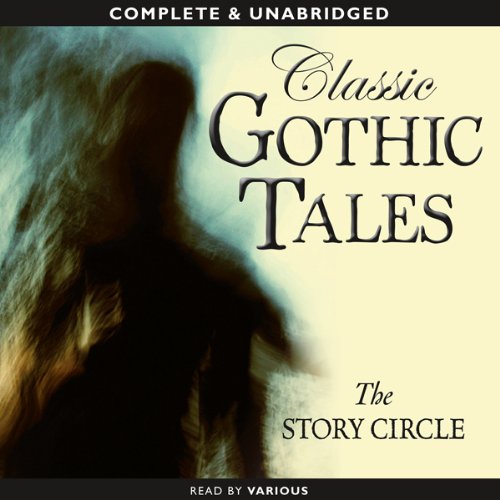 Here are 19 classic tales from masters of the genre. The collection comprises:

'Schalken the Painter' by J. S. Lefanu; 'Sredni Vashtar' by Saki (H. H. Munro); 'The Room in the Tower' by E. F. Benson; 'Charles Ashmore's Trail' by Ambrose Bierce; 'The Mark of the Beast' by Rudyard Kipling; 'The Castle of Ratcliffe Cross' by J. Wadham; 'The Bead Necklace' by Alice Perrin; 'The Oval Portrait' by Edgar Allan Poe; 'The Leather Funnel' by Arthur Conan Doyle; 'Berenice' by Edgar Allan Poe; 'The Cedar Closet' by Lafcadio Hearn; 'An Original Revenge' by W. C. Morrow; 'A Madman's Manuscript' by Charles Dickens; 'Hurst of Hurstcote' by E. Nesbit; T'he Return' by H. Murray Gilchrist; 'The Devil of the Marsh' by H. B. Mariott-Watson; 'The Professor's Story' by Amelia B. Edwards; 'The Music of Erich Zann' by H. P. Lovecraft; and 'Across the Moors' by W. F. Harvey. Read by Sean Barrett, Anne Rosenfeld, Hayward Morse, Liza Ross, Garrick Hagon, Paul Panting and Nigel Lambert.

Fireside tales for the darkening year

There are no bad stories here, and there is a lot of variety. Some of the stories are old-fashioned tales which are very much of their time, and may strike one as somewhat less gothic than quaint, such as ACROSS THE MOORS or THE BLUE BEADS. Others are deeper, darker, and more imaginative.

"The Story Circle" is at its best when it presents stories which haven't been included in too many anthologies. Unfortunately, this one included many well-known and heavily anthologized stories, such as SREDNI VASHTAR, THE LEATHER FUNNEL, BERENICE, THE OVAL PORTRAIT, etc. However, they are very well performed. I haven't heard a bad narration yet from anyone in "The Story Circle."

For me, there were two stories that would have made it worth owning this no matter what else was included, and these rarely found in audible format:

My favorite was A STRANGE EVENT IN THE LIFE OF SCHALKEN THE PAINTER by Sheridan Le Fanu, a fantasy that takes us back to the Golden Age of Dutch painting. The eponymous character is a nod to Godfried Schalcken (1643-1706), a technically brilliant Leiden "fijnschilder." As M.R. James said, the story is "one of the best of Le Fanu's many good things." It is atmospheric, dark, imaginative, and chilling. I love listening to anything about painting and in this one, I can almost smell the studio and see the scenes described in Sean Barrett's brilliant narration.

THE MUSIC OF ERICH ZANN is said to be the story Lovecraft believed his best. I haven't read enough Lovecraft to make any comparisons, but standing alone, it is a truly brilliant story. The narrator tells us how he made the acquaintance of a mute, eccentric musician, Erich Zann, who plays the viol, an obscure bowed stringed instrument. He finds Zann on the Rue d'Auseil, a street neither he nor anyone else has been able to find since the occurrence of the events he describes in his story. Garrick Hagon brings the strange intensity of this highly original story to life.

I must admit I hadn't read some of the stories in this collection before. I can't say I was blown away with the ones I hadn't heard, but all in all it was a good mix of stories. The narration was very good, and I'll be checking out more audiobooks from The Story Circle. The story that really stood out to me was The Room in the Tower. Excellent narration on this one and the more I read/listen to this story the quicker it is becoming one of my favourites! Pick this one up and give it a listen!

Some excellent stories, but they definitely save the best for last. sent shivers down my spine.
Story circle at their best.
Well worth a credit!!!

Variable but the good stories are very good

Variable but the good stories are very good and even on the ok stories the narration is very good.