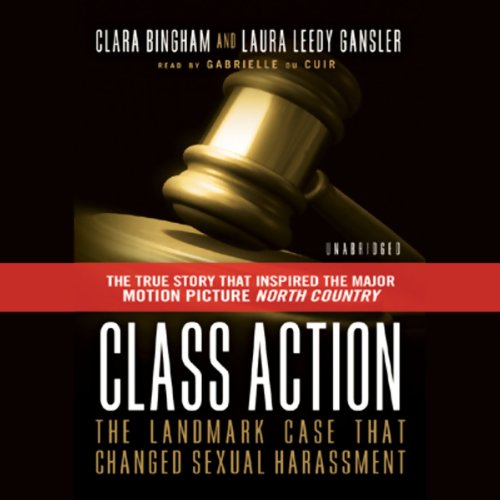 When the local iron mine began hiring women in 1975, Lois Jenson, a single mother on welfare, didn't think twice about accepting the grueling but well-paid job. What she hadn't considered was that she was entering a male-dominated society that fiercely resisted the inclusion of women, a prejudice born out in the brutal harassment of every female miner. Relentlessly threatened with pornographic graffiti, denigrating language, stalking, and physical assaults, the women largely kept quiet for fear of losing their jobs, until Lois, devastated by the abuse, found the courage to file a complaint in 1984.

From Jenson's first day on the job, through three intensely humiliating trials, to the emotional day of the settlement, this is the thrilling story of how one woman pioneered and won the first sexual harassment class action suit in the United States.

"Riveting, assiduously well-reported....A useful reminder of the emotional and psychological cost of waging even the most successful-and justified-lawsuits." (New Yorker)
"Bingham and Gansler have come up with mesmerizing, complex portraits of the participants in a beautifully paced narrative....Impeccable." (Washington Post)

A great reason to hate the legal system.

While the story is obviously one sided, it is hard to imagine a reason that could validate what these woman went through. That is was not resolved until just a few years ago is amazing.

The story of the first class action sexual harassment case in the US is intriguing and will infuriate you as the details of what these woman were subjected to unfolds. They were victimized by coworkers, management, their union, attorneys and even judges. Whatever they won could not begin to repay them for the mental anguish and health issues they suffered.

A listen worth your time.

Both the book and the narration are very good! This is a riveting story of the troubles encountered by the first women workers in a northern Minnesota mine in the 1970s and 80s. The narration is excellent and the pace of the book is more like a well-done novel than a work of history. I highly recommend.

This was about the first class action sexual harassment lawsuit and perhaps one of the first sexual harassment cases period brought into the Minnesota courts. Class Action does not in any way offer a quick payoff as it takes more than 15 years from the time Lois Jensen, the lead plaintiff, begins to experience intolerable sexual harassment in the Eveleth Mines of MN and the case ends.

Class Action details the price paid by the women who pursued this case. You may find the language and the graphic depictions somewhat shocking, but this is a true account of what happened in some mines and other workplaces prior to and even after Anita Hill's testimony against Supreme Court Justice Clarence Thomas, and Congress and the courts establishing damage awards for sexual harassment.

The narrator does a fine job, but the book repeats itself slightly in a couple of areas.

I chose Class Action because I teach a course in Human Resources Management that includes sexual harassment as part of the curriculum. Having an interest in the subject matter is probably the most important prerequisite for enjoying this book. If you choose Class Action, I hope you enjoy it as much as I did.

One of the best procedurals I've ever read

Compelling, gripping, infuriating, and wonderfully written and read, this book is a masterwork. Highly recommended.

This book is absolutely riveting.
A must read for ALL who wish to understand sexual harassment laws and civil rights.

I really enjoyed this non-fiction book. If you like legal thrillers, this is a true one. I can't imagine going through what these women and lawyers went through for over 10 years to make history. I highly recommend this book.

Thank you to all who sacrificed so much!

It broke my heart to hear what each one of those women endured! I am extremely grateful that it ended well for all women in the work force today. It took men and women willing to sacrifice for what is right for that to happen though. Thank you, thank you, thank you!!

Women's struggle to be safe at work and in courts

This is a detailed history of the abuse of the first women mineworkers by their fellow workers and then by the court system. Thanks to the women who brought legal action, sexual and physical abuse of women is far less rampant in the workplace. But the legal system remains abusive. Just ask injured workers who file for workers comp and are harassed, denied care for years, and further injured by insurance carriers, who control the "legal" system.
Society owns a great debt to the women who sacrificed their lives to eliminate physical, sexual, and financial abuse from the workplace.

On and On and On

For such an important event in our history, this book just went on and on and on. Granted, I am sure those invloved in the struggle felt this sentiment, but as a literary effort it did not work. How awful to have had to live it, but I do not need to suffer through reading it.