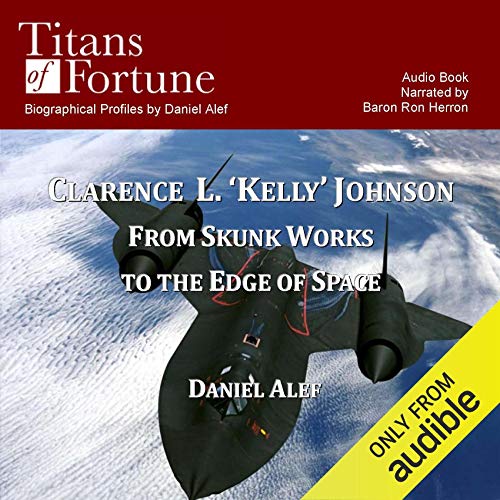 Kelly Johnson designed the Blackbird, a plane that flew non-stop from London to Los Angeles in less than four hours, outracing the sun and landing four hours before it had taken off, a remarkable feat - and this was more than 35 years ago. Johnson was the innovative genius behind Lockheed's "Skunk Works", and played a leading role in the development of more than forty aircraft, including some of America's most sophisticated planes such as the Constellation, Shooting Star, F-104, U-2, and the SR-71 Blackbird. In 2003, as part of its commemoration of the 100th anniversary of the Wright Brothers' flight, an Aviation Week & Space Technology poll ranked him eighth on its list of the "Top 100 Stars of Aerospace" in the first century of flight, just behind the Wright brothers, Leonardo Da Vinci, and Charles Lindbergh. The president of Lockheed once said: "That damned Swede can actually see air." Award-winning author Daniel Alef tells the remarkable tale of the man who garnered 35 major awards for his aviation feats, including the Medal of Freedom, and brought us to the edge of space.

Hardly an audio book. More of an audio pamphlet.

This is probably not the Skunk Works book you wanted to read. It's a 20 minute summary of a person's entire life and career. The reader sounds like a newscaster or someone reading an announcement. Avoid.

Otherwise enjoyable. But when it was finished I thought it was just the end of the introduction.

Kelly Johnson'life in one chapter.

This is a quick recitation of Kelly's life in one chapter. It was read like a 1930's movie news report.

Would you listen to Clarence L. 'Kelley' Johnson again? Why?

What was one of the most memorable moments of Clarence L. 'Kelley' Johnson?

What he did and how

The Making of GREAT air planes.

The story was to short

Too few details, just a small amount of uninteresting biographical facts. I was hoping to hear more about aviation and technical challenges. Got none of that.