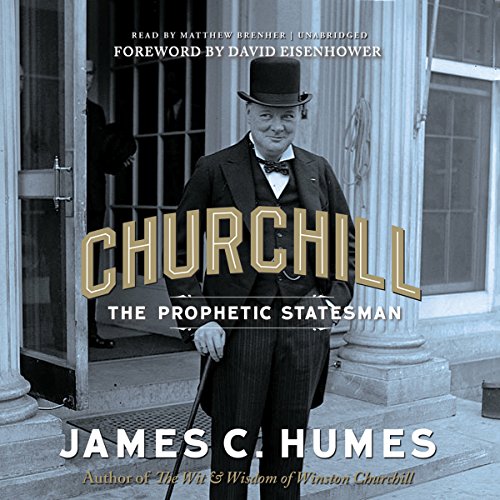 Churchill: The Prophetic Statesman reveals the astonishingly accurate predictions of Britain's most famous prime minister and how his critics' perceptions of them shaped his political career. Who could have foreseen the start of World War I twenty-five years before the assassination of a Serbian archduke plunged Europe into war? Who could have predicted the rise of al-Qaeda nearly eight decades before anyone had heard of Osama bin Laden? Winston Churchill did. Now for the first time, bestselling author James C. Humes reveals these and other shocking predictions made by this legendary figure. Churchill didn't need a crystal ball to tell the future. Using his skills as a historian, he studied patterns of the past to make his eerily accurate forecasts, including the rise of European fascism, the fall of the Iron Curtain, and the exact day of his own death as he entered his final years. In fascinating detail, Humes' astonishing biography documents the spot-on prophecies Churchill foretold and the political consequences he endured for sharing them.

James C. Humes, a former White House speechwriter for five presidents, is a Pulitzer Prize–nominated author of more than thirty books. He is currently a historian at the University of Colorado at Colorado Springs.

The voice in the wilderness--Are we listening yet?

Since I was a teenager I have been fascinated by Winston Churchill. I have read everything about or by him I can get my hands on. I love to read his writings, his mastery of the English language turns speeches into prose. I read his book "The River God" and found the information about Islamic terrorism he wrote in th 1890's as valid as if he wrote them today. Some of the information from "River God" was covered in this book. James C. Humes tells about Winston Churchill Jr meeting with George W Bush in the White House after 9/11 and reads Bush a speech Churchill gave in Parliament about Islamic Terrorism and the problems and obligations the British faced in Iraq after WW1 which match what the USA faced after we attack Iraq. It was unnerving how similar they were. All the information and the naming of the cold war by Churchill was right on target. Humes pointed out a number of times, quotes by Churchill that the more one studies history the better he will be able to see event in the future. Churchill said he learned so much from writing the "History of the World". Mathew Brenher did a good job reading this book. If you are a history buff or a fan of Churchill this is a must read book.

Would you listen to Churchill again? Why?

Yes, there is a lot to be learned from Churchill. Lessons from the past teach us why the world is in the current state of upheaval and what are likely outcomes in the future.

What was one of the most memorable moments of Churchill?

His eerie prediction of the coming (and now here) problems with Islamic terrorism, and the letter he wrote that was read to G.W. Bush after 9/11.

Have you listened to any of Matthew Brenher’s other performances before? How does this one compare?

Not possible. There is just too much to digest. I shall be listening to this again and again.

the narrator was great, the book was the perfect Sunday of Churchill's brilliance before we traveled to England