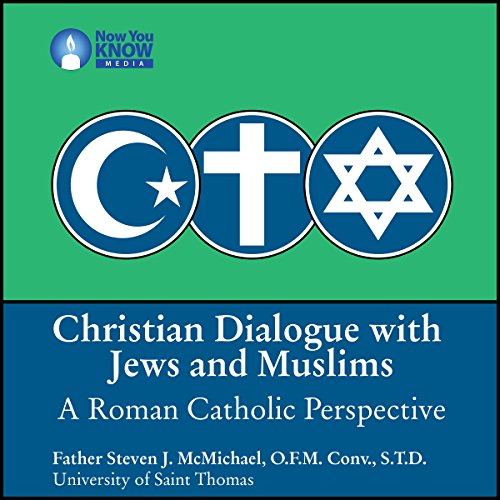 Christian Dialogue with Jews and Muslims: A Roman Catholic Perspective

Through this series of talks on Christian-Jewish and Christian-Muslim dialogue, you will explore some of the theological and religious issues that are in the forefront of each of these dialogues. Because Christians have a different (but similar) relationship with Jews and Muslims, this series will treat the two relationships in different sections.

Beginning with what dialogue means, you will first look at the issues that Jews and Christians have been discussing the last 40 years. The issues include the covenant, Scripture, Jesus in his role as Messiah, and anti-Judaism. Then you will look at the issues that have been central in the Muslim-Christian dialogue, including the role of Jesus in Christianity and Islam, Muhammad, and the Qur'an as revelation. Each of the two sections concludes with a presentation on Roman Catholic dialogue with each respective community and then another on Pope John II and his approach to Judaism and Islam.

Through this series of 12 talks, you will gain an appreciation for the dialogue that has been taking place among Jews, Muslims, and Christians for the last four decades. You will gain insight and tools to help you understand and contribute to answering the call of the Second Vatican Council to promote mutual understanding and respect among these three Abrahamic faiths.