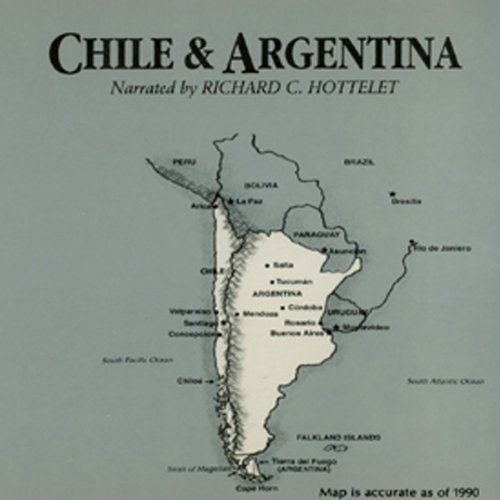 The "southern cone" of South America has a vibrant yet checkered history. Argentina in 1920 was a productive and wealthy nation, yet by the 1980s was reduced to virtual third world status. Chile has a long history of internal strife, usually with representative politics until authoritarians seized power in 1973. Chile was influenced by Spanish conquerors; Argentina's Italian and German immigrants made it the most "European" of any South American country.

The World's Political Hot Spots series explains the basis of conflicts in some of the world's most politically sensitive areas. Many of these regions are in today's headlines, and tensions recently have become violent in virtually all of them. Each presentation covers up to 10 centuries of background, revealing how and why today's problems occur.

The World Political Hot Spots Series is a mixed bag. On the one hand, few audiobooks cover many of these forgotten states in depth. On the other hand, they are very generic, lacking in the kind of authorial investment that makes deep books interesting.

What I wanted from this book was insight into the nature of the state, society, and economy of Chile and Argentina. What I got was a straight history. But it was too much territory to cover in too short a time. This meant that much of the history came at the price of understanding. Rather than explaining why some very important event happened - say the U.S. orchestrated coup that overthrew the democratically elected Allende in Chile, or else the rise of the post-WWII fascist-populist, Juan Peron, in Argentina - I instead got more facts. It is interesting history and we should know it - important transformations are afoot in Latin America. But if it is a history that is lacking in narrative and analysis, it is a history that will be too easy to forget - unless it is reinforced by more study from some other source. Since learning history usually requires a person to go over the same material repeatedly, this is not such a bad thing. And a little history is better than none. But this just felt too cursory and shallow to bring about understanding.

If you are interested in better understanding Latin America in general, consider Michael Reid's masterful "Forgotten Continent," which historically contextualizes the history of every state south of the U.S. and analyses the current political and economic changes in all of the big states. Or else try Felipe Fernandez-Armesto's brief but unbelievably insightful, "The Americas." This treats the history of the whole Western Hemisphere as being moved by common forces. Either book will serve as an excellent compliment to this incomplete source.

So far as the reading goes, you must be tolerant. Older audiobooks just don't have the quoting thing down. This one brings to each separate quote, of which there are numerous, a different, exaggerated, and ultimately silly accent. The Koran says, "seek knowledge as far as China," which was a distant place indeed to Muhammad. We should be willing to go at least as far as the guy with the comical voice.

It was like listening to the social and political history of the region by an American football play by play announcer. Sometimes he would go WAY out of his way to try to pronounce the Spanish correctly, and then he would utterly butcher other words. It was kinda funny. I got this to learn more about Chile and Argentina before traveling there and learned some things so overall was happy.