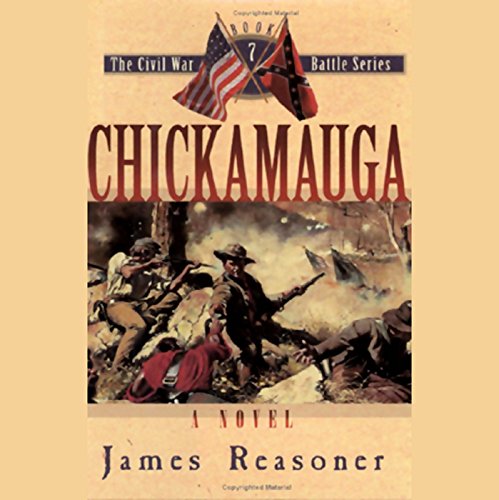 Chickamauga is the seventh book in a series of historical novels spanning the Civil War and describing its effects on one southern family.

The action spans the area from Pennsylvania and Virginia to Georgia, Mississippi, and Illinois. The seven members of the Brannon clan of Culpeper County, Virginia, experience a wide range of the many hardships of war.

The Southern setbacks of July 1863 have fallen hard on the Brannons, for two sons were with Lee in Pennsylvania and one was at Vicksburg. They still mourn the loss of another, Titus, presumed dead but actually interned in a Northern prison camp for seven months.

Mac Brannon, in Stuart's cavalry, helps to protect the Army of Northern Virginia as it withdraws to Virginia. Of special concern to him are the ambulance wagons, one of which carries his wounded brother, Will.

In Vicksburg, Cory Brannon recuperates from an illness, and as his health returns, he looks for ways to escape the Union occupation and join Nathan Bedford Forrest's cavalry.

In the Yankee prison camp outside of Chicago, Titus is determined to escape and make his way home. He does not yet know the price of his freedom.

Cory and his comrades connect with Forrest just in time for the action at Chickamauga.

Although the battle goes well for the Confederates, Forrest and his commander, Braxton Bragg, have a falling out. Circumstances dictate that Cory remain with Bragg in the Confederate camps that encircle Chattanooga, but when Bragg decides to outwait the Union army trapped before him, the scene is set for the arrival of a new Federal commander, U.S. Grant.

The best one so far

This may be the 7th in the series, but I enjoyed it the most. Great sets of characters coming together to resolve some story lines of the different Brannon family members and start new ones. Good description of the battle of Chickamauga. A bonus is that there is also a good description of aspects of the battle of Missionary Ridge and Lookout Mountain. A very touching part near the end and the last four sentences are Great! The narrator does his usual very good job.

WOW. What a clift hanger book 7 is. If the last 3 books in the series are as good as the first 7, I cannot wait to get them! Excellent approach to involving people. This series is not about the war, but it is about people and how families were affected by that war. A must read.

Of all the seven in the series I've heard so far this was the weakest - a bit like James Reasoner had a bit of a rest after the toil of Gettysburg and before the grand finale. I found it somewhat predictable and the cliffhanger not such a cliffhanger at all just a bit awkwardness that will need a bit of ironing out!

Lloyd James continues to sparkle but the production team let him down - the editing was slack as several times paragraphs were repeated. I am still looking forward to the rest of the series - I have to know what happens I just hope that James Reasoner hasn't completely run out of steam and the editors have had a cup of coffee and are back on the ball.