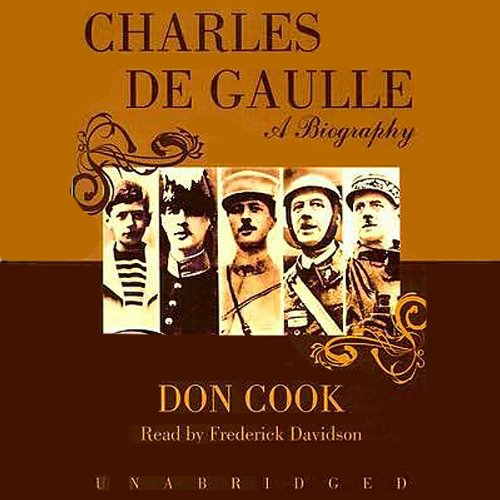 This magnificent volume by veteran European correspondent Don Cook is the first major biography of de Gaulle written by an American from an American perspective. Rich with new anecdotal material, it offers fresh evaluations and sheds new light on Europe's most controversial and enigmatic general, politician, and statesman.

Arrogant, haughty, single-minded in war, politics, and his personal life, Charles de Gaulle ranks in many ways as the most powerful personality of an epoch blessed (and cursed) with powerful men. Hitler, Churchill, Roosevelt, Stalin, Truman, Kennedy, and Khrushchev: all locked horns with de Gaulle, and all eventually bowed to his wishes.

This exciting biography takes full measure of the man and full measure of his times, when great soldiers and statesmen fought center stage and the fate of the world hung in the balance.

©1983 Don Cook (P)1997 Blackstone Audio, Inc.
Storico Politici
Mostra di più Mostra meno
"No one has done a better job in painting the real de Gaulle...an outstanding biography." ( New York Times)
"De Gaulle's career may have been an ordeal for his contemporaries, but in Cook's hands it has become a delight for readers." ( Time)

A great book about a complex person

Well written and thoroughly researched, is this book about Charles de Gaulle. I like books that create emotions and this book really makes me loathe Charles de Gaulle. Having listened to it with great interest, I know understand why de Gaulle upset som many people in his life. He was completely obnoxious. Here we have real events, where most occurred in my parents' and my own life time. Thus I have the benefit of having actually heard of - or in some cases actually experienced - the events pictured in this book. As far as I understand the author tells the story from de Gaulle's viewpoint, but also from the viewpoints of the people with whom he interacted. This book I could listen to again (and that is a good grade).

This magisterial biography is well known in the vast literature on the subject character. It is well recorded by and large, but here I venture some reservations. I have found this particular narrator to be a bit too "arch" and "overly-Britsy" for me taste, though he has done several of the serious history works I've purchased. Someone does however need to correct pronunciations e.g.: the British battleship "Resolution" pronounced as if it were a French word; and the well-known American Admiral Leahy prononunced as "Lee-hee". Minor yes, but annoying.
Also there is a practice I've noticed in other recordings: the tendency to imitate the real or imagined voice of someone quoted. Here Churchill is given a sort of commonplace imitation treatment by the narrator. I'm not sure if this practice is professional or too "show biz" for me.

A Haughty Biography as Told by a Haughty Narrator

I can't help but admire and respect Charles de Gaulle after hearing this story. I especially appreciate the detailed insight into this political diva. A well written and assembled story as told by a British narrator who himself comes across as equally haughty (not in a negative way). His warning to JFK on America's foray into Vietnam was especially revealing. Charles de Gaulle was every bit as impressive as he was proud, a great leader by any measure. Certainly worth the listen.

…Free from opinion, revisionism or agenda so characteristic of today’s historians. (With the publication date of 1983, I guess I shouldn’t be surprised). The writing is engaging….not the elegant prose of some historians, but certainly pleasing and easy to follow. Although DeGaul is neutrally presented, Cooks biography is not a dry rendition of “just the facts”. Instead, his detailed research and even delivery brings to life a man who is nationalism, intransigence and determination make him an equal to those unusually powerful personalities of the 20th century.

De Gaulle is probably fairly depicted in this long work - at least he is as believable and as flawed as he must have been in real life.

De Gaulle is such a unique character in history ranking among the greatest in leaders of all time. The circumstances that led him to go from a battle field colonel in a doomed army to arriving in London as an unknown representative of the Free French, sentenced to death in absentia by the Vichy government, to finally leading France back to its place in the world is a path that very few people in history could have walked and succeeded.

The read is excellent.

interesting insights on the stubborn general

Interesting, probably quite objective vision and explanation on De Gaulle, full of interesting anekdotes. Maybe the French of the narrator could have been better, but the poor pronunciation also added charm to it. Maybe a bit severe on Vichy??? it s the winners who write history?

Frederick Davidson provides a dramatic reading with feigned accents for Churchill, Americans generally and an affected French accent depending on the character. It ultimately grew on me and improved my understanding of the book and broke up the narrative cadence. It is a creative reading of a thorough book.

This is a well-written, well-read book. I was sorry to have it end. I knew very little about Charles de Gaulle before listening to this book, but now feel I know him intimately. He was a very contrarian, difficult person, but always had the interests of France at heart, as he saw those interests. In this day of nationalism in the US and around the world, we only need to look back to de Gaulle to see a nationalist with vision.

I was a very young child during De Gaulle’s final years of power, and can vividly remember my father ranting about “that damn De Gaulle.” After listening to this book, I understand why. But I had also listened because other histories of powerful World War II figures had left me with the impression that De Gaulle was badly treated by FDR, which fed his later virulent anti-Americanism. This book generally supports that.
This is a well-written history of a fascinating, at times excruciatingly difficult figure. However, at times the same could have been said of Churchhill (though not to the same degree). I thoroughly enjoyed it, and found it quite enlightening, especially regarding early Cold War politics in Europe.
The narrator held my interest, with good use of inflection and tone. His ability to do the voices of famous men was mixed. His Churchill is spot on. He struggles with Americans. He gets an occasional flash of JFK’s Boston, but no one would guess that his LBJ was a southerner. American listeners who have done the Harry Potter audiobooks may find it a bit like listening to a narration by Phineas Nigellus Black. But that’s our problem, not his. Overall he does a fine job.

This book is very interesting in its content. Unfortunately the narrator has decided to read the whole thing in a voice that is, quite frankly, beyond ridiculous. I have no idea what he was aiming at - some sort of debonair British diplomat, but it is completely unnatural and totally distracting. Makes the book almost un-listenable. Shame as, like I say, the content is fascinating.

Suggest a re-record for this one.

Part of the story not that often told. A nation is built on forgiveness.

Very well researched and written book. Liked the narrators style once you get used him.

Quality of recording is disappointing

The reading itself is fine but somehow there's pause here and there and the sound of turning pages and someone's breathing is very annoying.
The book was written in 1980s so there might be certain things that have come to light since.

Would you listen to Charles de Gaulle again? Why?

Narrator is clearly a professional speaker but unfortunately has a clipped English accent and pronounces all the French names rather badly. He then uses a fake French accent for the de Gaulle quotes. The recording is clean but the sound level fluctuates a little. Generally quite easy to listen to.

What did you like most about Charles de Gaulle?

The book tells of a single mans struggle, drive and desire to write his own names into the history books...he did it to.

Which character – as performed by Frederick Davidson – was your favourite?

It's a great true story of De Gaulle's drive to become the destiny of France, its saviour, its greatest son...with a pig-headed determination to lead France...he would argue point blank with the most powerful men in the world, until he got his on way.

Where does Charles de Gaulle rank among all the audiobooks you’ve listened to so far?

Good history which moves at a reasonable pace. Very interesting to hear of times in world war 2 and creation of 5th republic.

What other book might you compare Charles de Gaulle to, and why?

A view of World war 2 from the Free French perspective which have not found among other ww2 histories.

Not as bad as other reviews indicated.