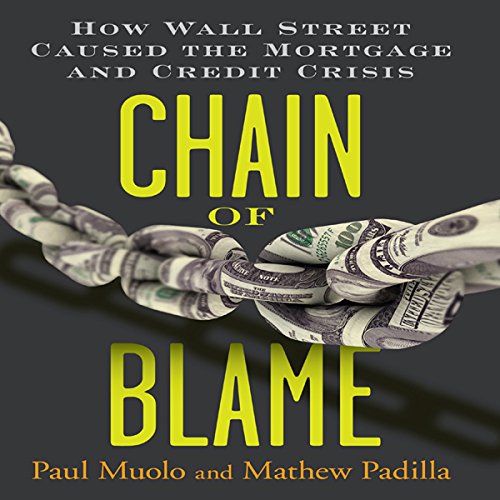 In the summer of 2007, the subprime empire that Wall Street had built all came crashing down. On average, 50 lenders a month were going bust - and the people responsible for the crisis included not just unregulated loan brokers and con artists, but also investment bankers and home loan institutions traditionally perceived as completely trustworthy.

Chain of Blame chronicles this incredible disaster, with a specific focus on the players who participated in such a fundamentally flawed fiasco. Acclaimed financial reporters Muolo and Padilla go behind the headlines to expose the truth about how this crisis occurred, what individuals and institutions-from lenders and brokers to some of the biggest investment banks in the world-were doing during this critical time, who is ultimately responsible for what happened, and perhaps more importantly, why everyone was so taken by surprise.

The authors reveal how human behavior and greed drove the demand, supply, and the investor appetite for these types of loans - and how Wall Street was all too willing to satisfy the desires of those who should have known better.

Great history of events, personalities and issues explained well and excellent narration. It's one of those listens you can't put down. Loved it!