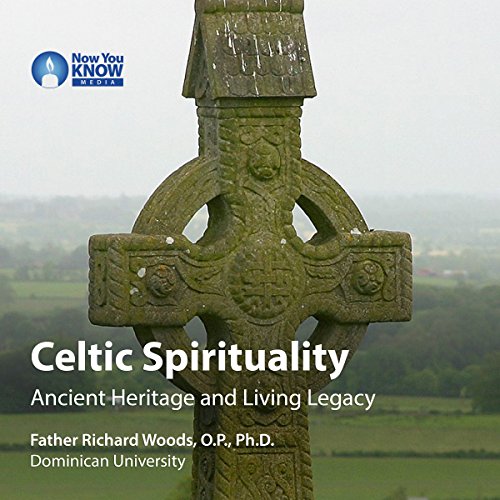 Celtic Christianity has produced a kaleidoscopic array of saints, monks, and poets.

In this series, Dominican Prof. Richard Woods cultivates more than 1,500 years of Celtic spirituality's rich traditions to acquaint you with the insight that these fascinating figures can offer us today.

Follow along as Fr. Woods delves into the origins, development, and contributions of Christianity as it spread throughout the northwestern region of Europe. After considering what makes a spirituality "Celtic", you will engage a host of intriguing characters - from the third century to the present - who interpreted the Christian faith in terms of the customs and beliefs of their ancestors. The monks and saints who recorded the evolution of Celtic Christianity likewise preserved the oldest known north European pagan mythology. The lives of saints such as Patrick, Brigit, Columcille, and David of Wales - along with monastic rules - illustrate the vivid history that was celebrated and embellished as much as it was recorded. The saints therefore serve as the chief witnesses to the creation of a unique understanding of a life lived in spiritual, if not material, abundance. Fr. Woods does not stop with these, however; instead he goes on to explore the knowledge of diverse Celtic thinkers, dreamers, and even the occasional rascal. In the second set of talks, Fr. Woods provides historical sketches that convey a number of major themes: from a sense of nature as Creation - which involves an acute awareness of God's presence - to a vision of the end of time characterized by distinctive frankness. In the concluding discussion, he will bring you to consider what Celtic spiritualities have to say to a world poised once more on the edge of profound change.

Delve into the rich legacy of the Celtic Church with this illuminating series today.

For years I have read Celtic spirituality books and articles. I’ve attended conferences and visited Iona. The ancient history added my understanding and clarified several concepts to modern religion and cultural rites. For instance, it is common knowledge to credit Celtic culture with the calendar changes of Christmas, Easter and Halloween. However, the author’s more thorough explanations was enlightening as well as complex. I recommend reading this book on Celtic Spirituality more than once. I will.

A very good delve into what Celtic Spirituality was, is and will be in the future. I appreciate that the material was fairly neutral and presented the facts without slant.

dry and detailed but no soul

the title is misleading. this is really a historical list of those in the church. it has no soul and though it is rich you get no feel for what the people were like...disappointing