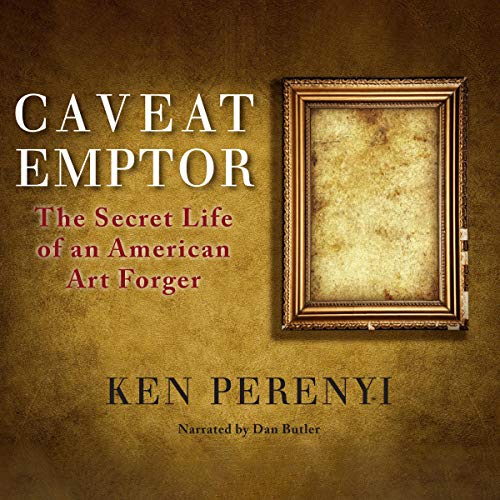 Ten years ago, an FBI investigation was about to expose a scandal in the art world that would have been front-page news in New York and London. After a trail of fake paintings of astonishing quality led federal agents to art dealers, renowned experts, and the major auction houses, the investigation inexplicably ended, despite an abundance of evidence collected. The case was closed and the FBI file was marked “exempt from public disclosure”.

Now that the statute of limitations on these crimes has expired and the case appears hermetically sealed shut by the FBI, this audiobook, Caveat Emptor, is that artist, Ken Perenyi’s, confession. It is the story, in detail, of how he pulled it all off. Unlike other forgers, Perenyi produced no paper trail, no fake provenance whatsoever; he let the paintings speak for themselves. And that they did, routinely mesmerizing the experts in mere seconds.

Would you consider the audio edition of Caveat Emptor to be better than the print version?

This is a hard question to answer. The audio version is excellent: the performance captures the excitement of Mr. Perenyi's life and conveys the details of various painting styles in way that kept my attention. For an art lover, I think a hard copy of the book would be invaluable because Mr. Perenyi's career covers so many periods of art history and painting.

Mr. Perenyi was my favourite character because of his love of learning and of art. I was struck by his genius, his ability to understand an artist, his burning desire to paint, his love of technique, and his ability to move in all strata of society. I wondered if he was really "for real" - but, in the end, I didn't care. I loved being reminded that geniuses live among us. Another favourite character was Jose, Mr. Perenyi's best friend and partner, who died of AIDs. He was depicted as a devoted and loyal friend without peer - a lovely, gentle soul.

Which character – as performed by Dan Butler – was your favorite?

I enjoyed the Roy Cohn character and was fascinated by the way in which Mr. Perenyi's life intersected with his.

Read this book for an adventure with some fascinating characters (including Andy Warhol) through some really interesting times; for a story of New York in the sixties and seventies; and for a master class in art and painting. It's a gem.

In the last paragraph of the book, the author, a self professed forger and con-man, states that pressure from the FBI has persuaded him to give up forgery and that he is looking forward to his next 'project'. I think he found it in writing the book and that is was not a far leap from his previous 'profession'. Multiple accounts of cranking out huge numbers of forgeries from different artist with different styles in relatively short periods of time (weeks) and doing it with such quality so as to fool multiple experts, were simply hard to fathom in the realm of reality. Add to these his accounts of multiple relationships with elite dealers and rich collectors who befriended him from the first encounter and you have a fairly well written (and well performed) story that is extremely interesting but leaves you wondering if the classification of non-fiction was a mistake. But the aspect of the book that left me scratching my head the most was the author's pride in the quality of the painting while referring to them as 'pictures'. I don't know a lot of artist and I am not an art collector, but aren't pictures- photos? Had I bought one of his forgeries I would have at least had something to cover the wall. With the purchase of the book, I just feel duped. The 2 stars for the story helps me feel a little better.

Fascinating, whether it is true or not

Reviews question the veracity of Perenyi's story, and I agree that some bits of plot are unlikely, such as a quick transition from being nearly illiterate to reading Dostoevsky. Still, the story is fascinating and I especially enjoyed hearing the technical tricks involved in forgery.

Pop art and an attitude

Well read autobiography that captures the irreverant attitude of the times. The author has a talent for description - using just enough (but not too much) to set the scenes. So often truth is stranger than fiction and much more interesting - as were the twists and turns in Ken Perenyi's life. He tells everything even bad judgement calls from his youth and young adulthood and ends up sharing a full character study (of himself) for the reader. The insights into the 1960s NYC art scene are very telling of the times and the generation.

Caveat Emptor is a quirky tale about Ken Perenyi's experience as an art forger who passed off dozens? hundreds? of paintings as originals. The book begins with some over-telling about his youth that really doesn't connect with the meat of the story--his art forging experience. The first half of the book could be summed up as he was a disengaged youth, unsure of what to do with his life until he happened upon art forgery. The second half of the book reads more as arrogant boasting than truthful story telling. While I still found the story compelling, I wonder how much is truth and how much is an embellishment of the truth.

Fascinating look inside the mind of a grifter.

it is a story about a talent, a skill....albeit put to illegal purposes. An engaging moral conundrum.

If you could give Caveat Emptor a new subtitle, what would it be?

The Art of Larceny

This was a great story and a good performance. It was worth the price even if (perhaps?) it was fiction or partially so. About half way through I started to doubt the authenticity of Ken's friends and experiences. How could one person from such a humble background so quickly and miraculously transform himself into a world class art forger in so many genres. How could such an average guy be befriended by so many extraordinary characters? How could such a guy be serially surrounded by world class women and models? Then I thought, so what... just enjoy the ride. So I relaxed and did just that and I think you will too.

Ken Perenyi is the author and subject of this well narrated true account. He explains how chance encounters combined with his extraordinary innate talent allow him to become one of the worlds greatest art forgers. Interesting on many different levels. Perenyi's talents went completely unrecognized by his teachers and he was relegated to a trade school which was more like a reform school. Learning nothing worthwhile, he had no employment prospects on graduating. He was exposed to the criminal element and somehow was hired doing menial tasks for an art restorer. He quickly showed aptitude and became a self-taught artist. Further random associations lead him to eventually copying famous works. He soon became brilliant and ingeniously learned tricks to fool the worlds experts. I never considered him a true criminal even though he was defrauding banks, art dealers and auction houses of millions of dollars. He is a sympathetic character and handles adversity well. His life is fascinating and well-told.

Could not put it down!

Would you listen to Caveat Emptor again? Why?

Grabs you from the very beginning and keeps you locked on the story through four decades of intrigue.

Hang on for a great ride!!

If you could sum up Caveat Emptor in three words, what would they be?

The first encounter with the F.B.I.

No. The entire book was just great!

The audio brings the story to vivid life. Spellbinding.