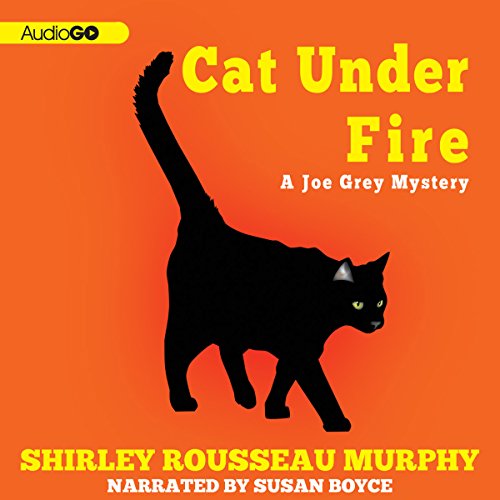 A big, powerful, gray feline, Joe Grey is perfectly content with his remarkable ability to understand and communicate with humans - especially now that he has company. A mysterious accident similar to the one that enabled him to speak and read has transformed his friend Dulcie as well. The trouble is, the cute tabby female not only hears human words, she believes them.

Now she's convinced the man who was jailed for murdering a famous local artist and burning down her studio is innocent - simply because he says so - and she's willing to do whatever it takes to dig up the evidence that will exonerate the accused. Joe would much prefer just lazing around the house doing kitty things, but the lady cat is determined. And Joe must admit that he is curious...though everyone knows what that can lead to!

I'm not usually good with fantasy and suspension of belief, but this book drew me in right away with it's talking cats that can open refrigerator doors to get their food, can make telephone calls, and can think and investigate with the best of the local police force. Joe and Dulcie are special cats but also have all the endearing and naughty traits of normal cats.

In this second book, one of their human friends, a well resound artist, has been murdered. The police have a suspect in jail, but he's been talking to the lovely cat who visits the jail. He doesn't realize that Dulcie can understand everything he's saying as he bemoans his innocence. Dulcie believes him and sets out to find the real culprit. Joe's not as enthusiastic, but he's dragged into the search by Dulcie.

This is a really cute mystery. The cats are so catlike within their human abilities. The search for the murderer is very well done and is solved very logically, though the cops are sometimes bamboozled by how some of the evidence and clues are found. No one knows that the cats can talk and understand everything said around them but their two owners. I listened to this on Audible and found myself laughing at the antics so well told by the narrator. Looking forward to reading many more of these tales!!

In general I like this series and have read them before though not for a long time. While listening to this one I stopped for a while. I think this is just one of the slower paced ones. Also now that other listeners have pointed it out, I do get a little tired of the long descriptions of cats eating other animals. Still will continue with series.

Didn't want to leave this community behind

We open on the quaint town of Molena Point, California where cats Joe Grey and Dulcie live. They enjoy their time hunting rats or small vermin, running from rooftop to treetop, eating the scrumptious food their owners Clyde and Wilma set out, and they enjoy a good conversation. Not only can they speak, but they can write, read, and use the telephone. Their skill set is growing every day, since they only recently discovered their special abilities. They keep quiet about this to all but their owners and friend Kate who is able to change from human to cat and back again, but she has left town for her own safety.

Molena Point has a new member of the community – Wilma Getz’s red-haired niece Charleston, or Charlie for short. She had attended art school in San Francisco, as did Kate, but after giving it a good two-year try, she threw in the towel and realized she was not going to make her living in the art world. She was excellent at sketching Dulcie, for instance, but the art school told her animal art just doesn’t sell. She moved to Molena Point, and within a week had a business permit, business cards, and two employees. She was going to fix up and clean up Molena Point! Her services were badly needed, since no one else took care of those small necessities. Charlie loved seeing things all spiffy and in working order.

Charlie’s first big job is cleaning the home of a local artist whose home was burned down. Since the fire occurred in the early morning hours and because her coffee was drugged, Janet never got out. The image of her body under a police tarp is haunting many people – Clyde, who once dated her, Dulcie who admired her, Wilma since they were friends, etc. Now Janet’s sister wants Charlie to totally revamp the home, no small task. However, she cannot start until the police release the scene.

The man suspected of setting the fire had been in jail and is now on trial. The case against Rob Parks isn’t overly strong, so the police wish they could find something in Janet’s hand about the people around her. They send a policeman to her home to search for a journal while Joe and Dulcie happen to be there. When he gives up and leaves, they take over and find a journal that is quite revealing. Dulcie alerts Chief of Police Max Harper, so that he can retrieve it himself.

Joe and Dulcie begin to wonder what else the police might have missed. While searching her home, Dulcie stepped on a thumb tack. Janet didn’t use them to stretch her canvases since they made her thumbs hurt pushing them in; she used a staple gun instead. Could the pile of paintings destroyed by fire not be the ones everyone thinks are ruined? What if they were taken off sight and replaced with something else much less valuable? Where would the paintings be? Who would have a vehicle to move them without drawing any attention to themselves or what they were doing? Joe and Dulcie do some terrific sleuthing and find many answers which she shares with Captain Harper. Max Harper is beginning to wonder who this anonymous informant might be, but the cats cover their tracks carefully.

I let out a sigh of contentment when this book ended. A smile came to my face, and I found the next book in the series to start right away. I didn’t want to leave this unique town of Molena Point, home of some very special cats and people.

This story is very entertaining and keeps you involved. As someone whose home is run by a cat, I am delighted with the descriptions of the feline traits and habits.

The second in the Joe Grey mysteries is so pure entertainment. Joe is joined by Dulcie, a cute tabby, who has stolen Joe’s heart, and nudges him on to more investigations. Both cats talk and understand human language, but Joe would much rather lay around and do cat stuff. But newly enlightened Dulcie will not hear of it. Convinced that an innocent man is in jailed for the murder of local artist, Dulcie insists on finding the true killer. The (almost gruesome) descriptions of the two cats hunting down their mice and other prey is realistic . . . and funny as heck. The banter between the two is hilarious. And their owners, who know what they are up to, and are trying to keep them out of trouble, is equally funny. The interactions with the local police chief, who is not on top of his game will have you nearly rolling on the floor. Great resolution to the murder mystery. Excellent second installment in the series!

I love this series about two clever cats and their owners. It's fun to see them solve mysteries. The catty cats are not over the top paranormal weird, just one regular Tom cat and one female smarty pants with an adventurous spirit.

When a fire takes the life of a friend of the kitty duo they are on the case. After things don't quite sniff out they start sleuthing around and their investigation eventually pans out. Now they must figure out how to get the message to the authorities without revealing themselves.

These are wonderfully light mysteries with excellent narratives. Great for anyone looking for a Nancy Drew type adventure.

I love cats. I love dogs. But it is clear that this author definitely does not like dogs. This is the second book I have listened to and also the last. Her writing depicts cruelty to dogs which is not necessary under any circumstance, story line, or plot.

I enthusiastically recommend you read the entire series. If you enjoy murder mysteries, cats, dogs, great food and people watching, this author is for you.

A first for me and as a cat lover and slave I enjoyed the way the cats behaviours were interpreted. I can just imagine if cats could take (wanted to) this is how they would do it!

second book fines the pair of cats investigate a murder and how they help the police solve it again. loved how the story continues and i love joe & dulci can't wait to listen to the next book to see whst they get up to this time.
i think if my cats could talk they might be like these pair

brilliant story and just love the mix of talking cats and mysteries they solve.

This book harks back to the comfy imagination of children's stories and a gentle who dunnit', anchored firmly in whimsy and murder... Very easy listening and good fun. This is unlikely to win any literary awards but is a nice bedtime listen.

This is the second book in the series that I have listened to. I wasn’t expecting much, as it seemed a weird premise, but both books have been good fun and have strong storylines.