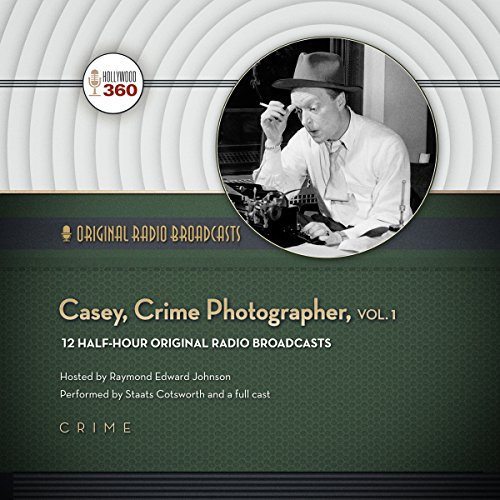 In the March 1934 issue of the legendary pulp magazine Black Mask, Jack "Flashgun" Casey, crime photographer, made his debut. His creator was former newspaper and advertising executive George Harmon Coxe Jr., who wrote more than 60 crime fiction novels in his lifetime. Casey's keen eye for detail served him well on the job, helping him to solve the crimes he was assigned to photograph for the newspapers. These "Flashgun Casey" stories were an instant success with Black Mask readers and soon made the leap to both radio and the silver screen.

Voiced by Staats Cotsworth for more than a decade, Casey was aided in his amateur detecting by fellow reporter Ann Williams, who, like Casey, worked for the Morning Express. When not at work, they frequented the Blue Note Café, a late night lounge where the bartender, Ethelbert, provided both a sounding board and levity for Casey and Ann as they awaited their next job.

Casey, Crime Photographer aired on radio from 1943 until 1955 and made the transition to television in 1951.

Episodes include "The Grey Kitten", "The Twenty-Minute Alibi", "The Mysterious Lodger", "The Demon Miner", "Box of Death", "The Gentle Strangler", "The Laughing Killer", "Pickup", "Self-Made Hero", "Photoof the Dead", "Bright New Star", and "The Chivalrous Gunman".