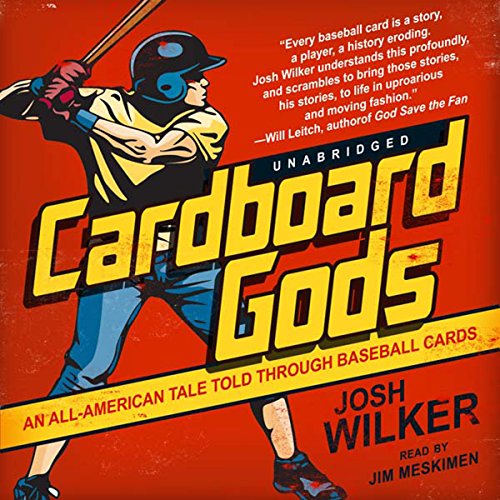 Cardboard Gods is the memoir of Josh Wilker, a brilliant writer who has marked the stages of his life through the baseball cards he collected as a child. It also captures the experience of growing up obsessed with baseball cards and explores what it means to be a fan of the game. Along the way, as we get to know Josh, his family, and his friends, we also get Josh’s classic observations about the central artifacts from his life - the baseball cards themselves. Josh writes about an imagined correspondence with his favorite player, Carl Yastrzemski; he uses the magical bubble-blowing powers of journeyman Kurt Bevacqua to shed light on the weakening of the powerful childhood bond with his older brother; he considers the doomed utopian back-to-the-land dreams of his hippie parents against the backdrop of inimitable 1970s baseball figures such as “Designated Pinch Runner” Herb Washington and Mark “The Bird” Fidrych.

Cardboard Gods is more than just the story of a man who can’t let go of his past, it’s proof that - to paraphrase Jim Bouton - as children we grow up holding baseball cards but in the end we realize that it’s really the other way around.
©2010 Josh Wilker (P)2010 Blackstone Audio, Inc.
“Josh Wilker writes as beautifully about baseball and life as anyone ever has.” (Rob Neyer, ESPN)
“Cardboard Gods is more than just a book. It is something that I lived and live still. I was the older brother. I live on Route 14 like Josh once did. My two sons were those boys in the picture, VW bus and all. Cardboard Gods awakened feelings in me that I have long suppressed. It is a growth book, like Catcher in the Rye. People, especially people who love baseball, will carry this book with them everywhere.” (Bill Lee, bestselling author of The Wrong Stuff, Red Sox legend, baseball bat entrepreneur)

Although I started collecting baseball cards ten years later, and I grew up in NJ rooting for the Yankees, I really related to this book. It is a great story about baseball, family, and growing up. I highly recommend this book to anyone that collected baseball cards in the 70s and 80s and idolized the players on those cards.

Baseball Card fan relatable. pretty good listen. Got a little wayward from time to time but the cards as chapters always served well to re evaluate the direction. pretty good, I had each and every one of those cards.