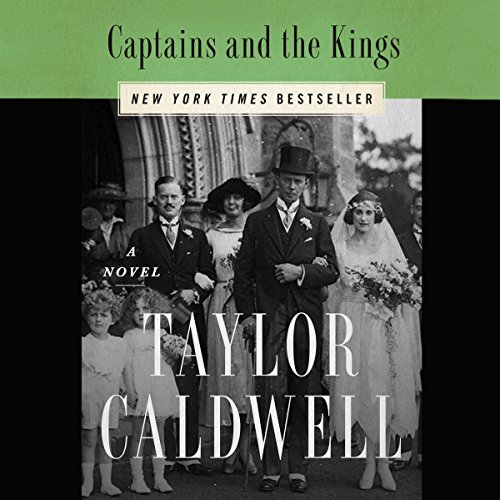 Joseph Armagh was 13 when he first saw America through a dirty porthole on the steerage deck of The Irish Queen. It was the early 1850s, and he was a penniless orphan cast on a hostile shore to make a home for himself and his younger brother and infant sister. Some 70 years later, from his deathbed, Joseph Armagh last glimpsed his adopted land from the gleaming windows of a palatial estate. A multimillionaire, one of the most powerful and feared men, Joseph Armagh had indeed found a home. Captains and the Kings is the story of the price that was paid for it in the consuming, single-minded determination of a man clawing his way to the top.

Melodramatic, in a style no longer used by most writers, Captains and. Kings is an old favorite of mine. My dad and I read these books by Taylor Caldwell when I was a young adult, so part of my pleasure listening to this audiobook was my memories of my dad.

As to the content of this story, I remembered in particular the idea that world bankers ruled the political scene for at least the Western world. I don't think that's true in particular but we certainly know that money plays a huge part in politics and that people in governments and high positions conspire against other people and other nation states. Lots of things were interesting in this story but our language has changed and melodramatic novels are not generally the rule these days. Still this one is worth a listen.

I will miss the fabulously complex characters and the glorious reading of this novel! Captains and Kings an amazing tale!

A rich and compelling story.

I watched this as a mini series in the 1970’s and was completely drawn into the story of Joseph Armagh.
I then read the epic story and it has stayed with me my entire life.
The characters and time period 1800- 1910 or so, are richly detailed and you feel as though you are in this drama with Joseph himself.
Susie Bernais does a wonderful job of bringing this complex story to life.
Lastly, this is not what you would call a “happy” story but it is truly a human story and that’s why it is has stayed with me since I was a teen.
Highly recommended indeed!

gripping story that keeps you engaged the whole way. full of grit and the reality of a young America

Although this story takes place at the time of the Great Migration mid 1800s ~ the relationships and characters and the challenges they face with government corruption is timeless. The characters are perfectly sketched for the reader, by that I mean they're lifelike with heroic attributes as well as tragic flaws. The main character Joseph is a strong character and Caldwell has the reader rooting for this tough Irishman throughout. I read this book years ago. A movie was also made but was nowhere near as good as the book. I loved the audio presentation here.

this book should be read by every high school senior. a real look at the early 1900.

As Timely today as when written. I heard glimpses of the Kennedy's woven into the history a hundred years before.

I liked the story but I felt it could have been shorter. the politics are timeless and reflect in many ways 2019.

To Read Taylor Caldwell is to Love Her...

...to not read or listen to her works is to lose the opportunity to experience the great mind of a very unique woman.

I cannot say enough about this book, this storytelling, this written prose, this narrator, and Taylor Caldwell.

A Gem of a Book and a Star of a Reader!

Captains and the Kings

This is a wonderful book that is ageless. I first read it in 1976 and I was so excited when I saw that it had come out on audio.

This book is a marathon to listen to - but well worth the effort. Excellently researched. Variations on Kennedy family rise from Irish Catholic obscure background, rise in the USA and then assassination. I may have struggled to actually turn the numerous pages in a paper book, but the narrator made the listening so very easy and held my interest even through the technical bits. It might be advisable to jot down names and relationships of some of the more obscure characters as you just never know when they might turn up later.

Thought i wouldn't make it to the end of this long saga...but I did and was pleased with myself....it was a bit superlative and I thought it really could be shorter...but as it got going the descriptive reading went unnoticed and I began to really enjoy the story of struggle and determination for this Irish family...so stick with it and you will not be disappointed...