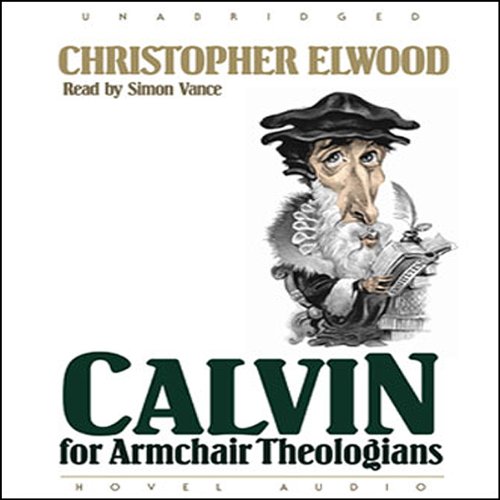 In this concise introduction to Calvin's life and thought, Elwood offers an insightful and accessible overview of Calvin's key teachings within its historical context. This is an engaging look at an all-important theologian.
©2002 Christopher Elwood (P)2008 christianaudio.com

Good for an overview if you don't have background

Originally published on my blog at bookwi.se

I consider myself an armchair theologian. And when I received a $10 promotional coupon in my Audible account, I found two books that were cheap and I would not normally use my Audible credits for. The first was the Bonhoeffer book. This is the second. Both are brief books, and oriented toward the lay theologian.

I think this book accomplished what it wants. It is brief (just under 4 hours) but does a good job summarizing Calvin’s basic thinking. There is not much biography here. A little more than the basic birth, school, marriage, work, death, but not much more.

Elwood mostly uses Calivin’s Institutes as an organizing method. Because that is what Calvin is most known for, I think it is an appropriate choice.

There is a some humor in this book. It sort of (in a good way) feels like a Dummies book. So as Calvin for Dummies, it throws in a few jokes and several modern illustrations to help explain what Calvin was talking about. The narrator is Simon Vance again. (Same as the Bonhoeffer book I reviews on Friday.) But in this book he did not come across nearly as pretentious and condescending. He did not hit some of the jokes all that well, but most of the jokes were fairly subtle, so it did not feel inappropriate.

I am not sure that I will pick up another Armchair Theologian book (there are a ton of them.) It is hard to balance a brief book with the desire for more in depth understanding of a theologian. And I think I probably have about the level of understanding that these books were written for on many of the subjects that have Armchair books.

But if want an introduction to an area that you do not have a lot of experience with, I think these are probably a good option.