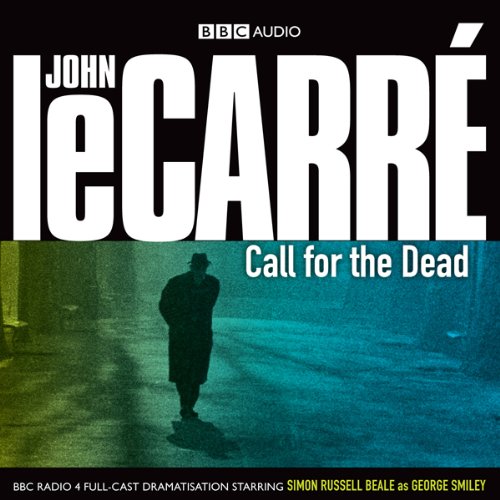 Call for the Dead (Dramatised)

This dramatisation, set in London in the late 1950s, finds Smiley engaged in the humdrum job of security vetting. But when a Foreign Office civil servant commits suicide after an apparently unproblematic interview, Smiley is baffled. Refusing to believe that Fennan shot himself soon after making a cup of cocoa and asking the exchange to telephone him in the morning, Smiley decides to investigate - only to uncover a murderous conspiracy with its roots in his own secret wartime past.

I missed that this was abridged, oops - well done all the same. The actors were good.

LeCarre never delivers a boring Smiley story and this one was great. My only regret is that it was not longer. Excellent performance by several actors to complete a roaring good read.

Impossible to follow, poorly presented, and a very inferior LeCarre.

Poorly presented, impossible to follow, and an inferior LeCarre. Not worth the price it cost to listen.

A Glimse of Eternity

The fight LeCarre describes is not one between good and evil but between those who burn books and those who read and write them. George Smiley is running an agent he thinks he knows but who is subsumed by his anti-Western culture and by his own disloyal family, much as Smiley is by his, though with less sinister intentions...

Give me reading, not dramatization.

I grew up reading constantly, but now I consume my books as audiobooks while driving. Audible makes life good.
But "Call for the Dead" isn't an audiobook, it's what we used to call a radio play. With the variety of voices, this one demands total silence while listening; road noise makes much of it inaudible. Consequently, I have an idea of the plot but only a vague grasp of the details.
I'm going to delete this one from my phone's storage. I have enjoyed John leCarre for decades, and I'm fine with rereading favorite books, but "Call for the Dead" was a waste. If I find an unabridged audiobook of it, I might try it again.
From now on, when reading Audible descriptions, I'll be much more careful to avoid dramatizations, especially if the BBC is involved.

The acting is OK -- although the female characters are often kind of squeaky, which may just be BBC's interpretation of how women spoke 100 years ago (doubtful but whatever) -- however, I was not expecting that the length of the dramatized book would be reduced by almost 75%. It makes sense, given program scheduling and so forth, but wow, such a lot was lost.

It seems that most of LeCarré's audiobooks have been produced both ways -- dramatized and narrated -- although I couldn't find this particular title in a narrated version. I am now reading the e-book and I am much happier. His writing is wonderful! And I will keep watch for a narrated version as well.

All Smiley all the time

This is for the Audible format. The ensemble cast reads so beautifully. There are no sound effects other than a voice fading a little as a character walks to the end of a room. No footsteps, no traffic noise, no glasses clinking. The professional voices add so much to the short story, which is excellent to begin with. All Smiley, all the time. Well, except for a couple of solos by Mendel.

A great adaptation of a great story. Perfectly casted. If you have read any Le Carre or seen the television series with Alec Guinness you would do well to give this a listen.

warning: this is not the unabridged novel

this is not the unabridged novel, it is an abridged audio dramatisation. Bit misleading, really.

This is an excellent bbc drama. The cast is good. And the story is entertaining.