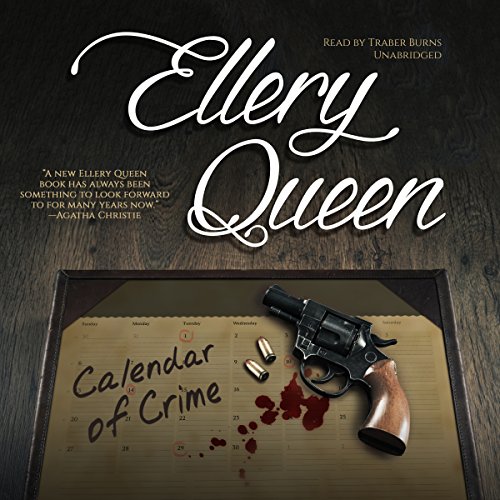 In the merry month of May, Ellery Queen made a trek to Gettysburg to witness an annual celebration - and an annual murder. February found the ingenious Ellery locked in a furious battle of wits with a dead US president. These are but two of the 12 appointments with crime that make up Queen's baffling calendar of conundrums. Each elegant enigma ticks off all the surprise and excitement that have made Queen the dean of American detective fiction.

Stories include: "The Inner Circle," "The President's Half Dime", "The Ides of Michael Magoon", "The Emperor's Dice", "The Gettysburg Bugle", "The Medical Finger", "The Fallen Angel", "The Needle's Eye", "The Three Rs", "The Dead Cat", "The Telltale Bottle", and "The Dauphin's Doll".

Similar to LeBlanc's Eight Strokes of the Cloick, this is a great collection of twelve mystetries--one for each month. A fun listen with some challenging and other easy stories.

A crime for each month...

Overall, a pretty good collection of short stories with more hits than misses. Each story is set during a different month, beginning with January, and several of them deal with holidays. Traber Burns is pretty good at narrating Queen.

A year of crimes one month at a time

A similar use of time as a gimmick here .Similar but not as badly done in Calamity Town. This time its done with some twists & turns & here is some joy here but the last story...no.

I loved going back in time! Well laid stories and well acted voice work. A mystery or Mr. Queen lover must listen audiobook!

I liked the narrator and storylines. I never knew Ellery Queen wrote short stories. I thoroughly enjoyed listening to them. The variety is incredible.

Enjoyable but a bit dry

The narrator didn’t work for me. His tone was too monotonous, and that messed with the vibe of the book. I enjoyed the quirky detective stories, though

As always, it’s fun to play along and most stories are amenable. Beware, Some are so straightforward that you may miss looking for something more complex. I like October for being most like the old TV game show.....Even English lit majors may find introductions and the non-action narration esoteric. On the other hand, pun intended, simple ploys like “only a left handed person could have...” are included.