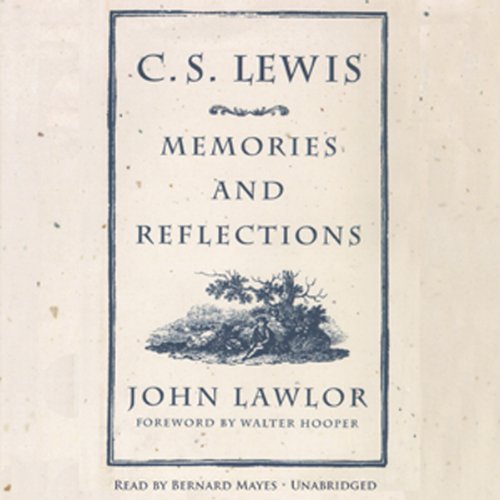 From his rare vantage point as Lewis's student, friend, and professional colleague, Professor John Lawlor recalls Lewis "in his habit as he lived." He offers an unforgettable account of studying under Lewis and an enchanting depiction of undergraduate life at Oxford between the wars. To round out his picture, Professor Lawlor draws on the recollections of other associates of Lewis, including a close comparison with J.R.R. Tolkien.

These sketches are complemented by an exposition of Lewis' science fiction and Chronicles of Narnia. There is also an assessment of Lewis' neglected notion of "happiness," noting its links with 19th-century English romanticism. After measuring Lewis's scholarly achievement, Professor Lawlor concludes with his own understanding of this complex man, in whom "maddening obstinacies and sword-sharp disclaimers co-existed with an untroubled awareness of the highest order."

My expectations of this book were high, but they were certainly not met. I was hoping for kind of a "innner circle view" of C.S. Lewis from one of his students and friends. What this book is is some very long drawn out reflections that focus primarily on Lewis' literary work and the author's critique and categorization of those works.
Also the narration was a bit too monotone and droll for me. I did listen to the whole thing but found myself having to listen in 10 to 15 minute pieces to keep from getting bored.
If you're looking for a critique of some of Lewis' work, this might be OK for you. If your looking for something that gives a bit more of an insider's biography, I would stay away from this.

The narrator whistles his "S"s and has a thick English accent that can be hard to understand at times. This whistling is most annoying. The book, however, is very interesting.