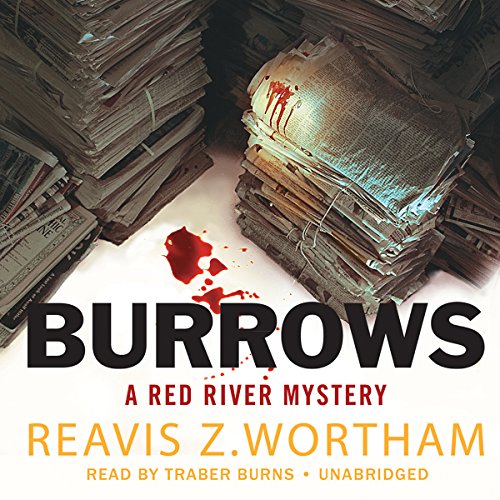 Lyndon B. Johnson is president, Beatlemania is in overdrive, and gasoline costs 30 cents a gallon when Ned Parker retires as constable in Center Springs, Texas. But his plan to live a quiet life as a cotton farmer is torpedoed. A phone call leads Ned to a body in the Red River and into the urgent investigation headed by his nephew, the newly elected constable Cody Parker. Together they work to head off a multistate killing spree that sets northeast Texas on fire.

As the weeks pass, Ned’s grandchildren, ten-year-old Top and his tomboy cousin Pepper, struggle with personal issues resulting from their traumatic experiences at the Rock Hole only months before. They now find themselves in the middle of a nightmare for which no one can be prepared.

Cody and Deputy John Washington, the law south of the tracks, follow a lead from their small community to the long-abandoned Cotton Exchange warehouse in Chisum, which they are stunned to find packed full of the town’s cast-off garbage and riddled with booby-trapped passageways and dark burrows. Despite Ned’s warnings, Cody enters the building and finds himself relying on his recent military experiences to save both himself and Big John. Unfortunately, the trail doesn’t end there, and the killing spree continues.

Reavis Z. Wortham is an author, humor editor, and frequent contributor to Texas Fish & Game magazine. His work has also appeared in American Cowboy, Texas Sporting Journal, and other magazines. He is the author The Rock Hole, named one of Kirkus Reviews’ Best Mystery Books of 2011.

“Outstanding…Wortham combines the gonzo sensibility of Joe R. Lansdale and the elegiac mood of  To Kill a Mockingbird to strike just the right balance between childhood innocence and adult horror.” ( Publishers Weekly)
“With atmosphere so thick you can breathe it, and characters so real you can touch them, Reavis Z. Wortham’s  Burrows is a book worth putting all others aside to read. Clear a space on your bookshelves, folks, because the real deal has arrived.” (John Gilstrap, author of  Threat Warning and  Damage Control)
“In  Burrows, Reavis Wortham juxtaposes gruesome crimes with a bucolic '60s landscape. It’s a surprisingly intense combination that kept me awake nights after not being able to put the book down. Wortham’s writing makes scenes and characters come to life.” (Charlotte Rains Dixon, author of  Emma Jean’s Bad Behavior and director emeritus of the Writer’s Loft)

I really liked the first book in this series, and was looking forward to this one. While the characters, small western town setting, narrator and writing is good, the charm of the first book was missing for me.The last third of the novel has characters traveling through a nightmare of trash tunnels in what can only be described as a hoarder's Taj Mahal. While I understand the Vietnam reference, and the skill with which this is presented, I thought the the story line was buried by the author's drive to show us the bravery, skills, trauma, and horror experienced by US soldiers who served as "tunnel rats" in Vietnam. It is an important topic, but completely overpowered the plot for me. Frankly, it was all a bit too unbelievable and claustrophobic, and I just wanted the book to end. BUT, I am not giving up on this series. The first was so good, and the characters are so strong, I plan to purchase the next in the series hoping this one is the exception.


Reavis Wortham is a craftsman, especially in action scenes. He has a sense of Dixie culture that's neither condescending (read Scott Thurow) nor exploitative (read John Grisham). Nor is he a tiresome proselytizer for progressive politics (read James Lee Burke). Oh he has The Noble Black Man, but also entire groups of noble white men... and women.

I like complexity and nuance. What I didn't like was the inexplicable(and interminable) burrowing which subjected two of his heroes to endless risk. Why they didn't just wait till morning and a crane I cannot imagine.... Nor could Wortham.

It helps this book that Traber Burns' tongue is sautéed in dead-on Dixie-country.

I wish that "Burrows" had been tightly edited but then it would have been too short. In this book Wortham is better at writing than at plotting. Still, I think I may get another Reavis Z. Wortham to hear how this guy's plotting grows.

This is the second book in this great series. I forgot how much I liked these characters until I got back into this one.

It's the 60's in a small town in North Texas and the whole town is terrified of a killer who is cutting people's heads off. The young, newly promoted Constable is in a bit over his head so his Uncle, the recently retired Constable is called back in to help along side he and the local Sheriff. This mystery is a strange one that delves deep into the compulsive behavior of an unbelievable hoarder. Cody, the new Constable and John, one of his men, must start on a treacherous journey through a warehouse where a hoarder has been living for years. Cody was a "tunnel rat" in the Vietcong War but even he is amazed and frightened by not only the sheer volume but also by the mindset of a person who could build this gruesome, boobie trapped maze.

All the regulars are back and of corse our cantankerous Pepper and Top are smack dab in the middle of where they should not be. A fast paced well rounded mystery with a group of characters that I am looking forward to reading more about.

Once again, Reavis Wortham takes his mysteries into the world of literary writing. This second installment of his Red River Mysteries combines Tom & Becky Sawyer, 1960's Texas small town cowboys, Vietnam War veterans experiences in tunnels, and a touch of Steven King, to produce a fast passed thriller with a coming of age story.

Ned has resigned as Constable but the towns folks continue to call upon him with their needs even though Cody has taken over this job. Truly, these two men, and Ned's counterpart in the Black community, John Worthington, work as a teem anyway, as titles are of little use to anyone In this small community. Ten year olds Top, and his precocious cousin Pepper, want in on all the action too. Though this may also result in whippings, and mouth washings with soap, their curiosity can not be thwarted!

When a headless body is found in the surrounding waters, a nightmare premonition of Cody's seems to be playing out in real life. A hoarder of the first order has filled the five story cotton exchange with tons of "stuff", garbage, and booby traps. Pursuing a lead, Cody and John find themselves lost in a deadly maze of burrows, with rats, snakes, body parts, and explosives---and they are trapped within this whole deadly mess. Hopefully, Cody's experiences in the tunnels of Viet Nam will help them to get out alive. Everything seems to be revolving around a suspected "crazy" character from the town's past who needs to be caught before more headless bodies pile up.

Again, great characters, thrilling descriptions, Texas humor, and twisted mysteries make this second book in this series a real winner of a book! Be sure to read the beginning in this series first--THE ROCK HOLE.

This book starts off well but deteriorates rapidly

I'd change the narrator, first of all. Then I'd give it a real plot and then I'd work on some character development.

Would you ever listen to anything by Reavis Z. Wortham again?

I really LIKED the first book in this series and was looking forward to the second one but it was just pitiful. I couldn't make myself finish it and I don't care how it ended. The entire middle part is filler and not attractive filler.

This narrator reads old men quite well. Women and children are not good at all. He makes me actively dislike them. And he's just WAY too dismal and downbeat about the entire thing. A better narration might have helped, but noting could have saved this plot for me.

Do you think Burrows needs a follow-up book? Why or why not?

I probably won't take another chance with this author

Just....darn it. It was a mistake to try to continue the series with these characters as they were. More time needed to pass. Small Texas town...how many murders can fall into the lives of two young children and a small rural town???

After thoroughly enjoying "The Rock Hole", this book let me down. The story line seemed discontinuous. In particular, I thought FAR too much time was spent describing the experience in the Cotton Exchange in gratuitous detail.

I thoroughly enjoyed the first book in the series. 1960's Western coupled with mystery was highly entertaining. This book on the other hand, reads more like a Dean Koontz book. Perhaps if I enjoyed reading horror, I would've rated this higher. But that's just not the case. The two children that provided so much humor in the first book, were bratty in this volume. If the goal of this book was to leave you feeling creepy and in need of a shower, then mission accomplished.

Second in series not as good as first.

I immediately went looking for more books by this author. I loved the style, pace, and glimpse into an era that I experienced st a child from the first book in the series.

Right away the narration didn't feel the same as the first book. The story wasn't as compelling as the first story either. In fact the portion of the story in the exchange, while really different seemed to have very little bearing on the overall plot. So I kept wondering why so much time was spent on it.

Overall I gave it 4 stars because I liked the first book. I will read more by him and hope he does better next time.

Spent way too much time in burrows. Actually got bored with what should have been nail bittery

This is a simply fantastic plot - one of my two favorites that I read in 2015. Mr. Wortham writes lovely Texas/Oklahoma characters from the 60s but his books are far from cozy. The scenario he set up really sparked my imagination. And the first scene surprised the hell out of me. I thought it was really well done. Love this book.

What other book might you compare Burrows to and why?

It made me feel nostalgic and sometimes cry but most of all it made me go "ooooohhh".