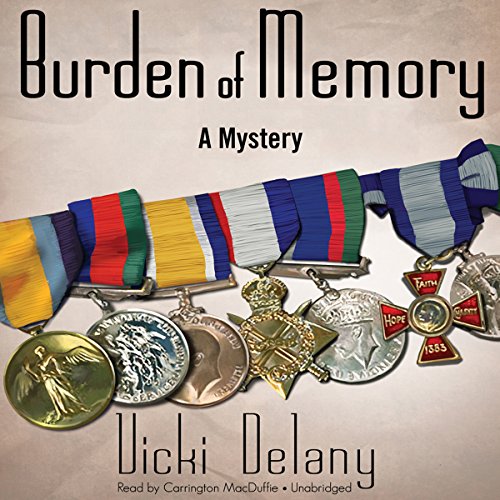 Elaine Benson, a successful novelist who let love in the person of an unreliable screenwriter jettison her career, is now divorced, broke, and on her way to a so-called primitive, untamed northern forest on Canada’s Lake Muskoka to interview for a job. Elderly Miss Moira Madison of the fabulously rich Canadian family wishes to write her memoirs. Miss Madison isn’t interested in a best seller; she wants to leave a record of her life and, most specifically, of her years with the Canadian Army Nursing Sisters of World War II. Her service in the European theaters was filled with triumphs and bitter losses and forever shaped her life.

Settling into the family “cottage” and what remains of a lifestyle long gone, Elaine reconnects with her love of researching the past - until she discovers that the first such writer hired died under suspicious circumstances. Could her project stir someone to murder?

Vicki Delany left a job as a systems analyst to settle in Prince Edward County, Ontario, where she writes mystery novels and a blog about the writing life.

©2012 Vicki Delany (P)2012 Blackstone Audio, Inc.
“The best Canadian novels are always firmly set in a place…Vicki Delany’s second novel effectively uses the Muskoka setting for a very fine novel about memory and class and caste in old Ontario.… Someone doesn't want the story of Moira Madison written and is willing to kill to keep the family secrets. Delany has done a great job with this book.… This is, obviously, ideal reading for a weekend at the cottage or as a hostess gift for visitors. Read it under the trees and see every page come to life.” ( Globe and Mail)
“Delany's fine second mystery offers a breath of fresh air from north of the border.… The alternating rhythm of chapters of contemporary narrative and shorter sections of Moira’s recollections of life as an army nurse helps build suspense. The striking setting, the picture of the Canadian social elite, and several deftly handled subplots make for a richly textured and highly satisfying read.” ( Publishers Weekly)
“After a messy divorce, Elaine Benson thinks that a job helping wealthy Canadian matriarch Moira Madison write her memoirs might be just the thing to get her nonfiction writing career back on track.… Readers who favor leisurely puzzles steeped in family dynamics and flavored with descriptions of beautiful scenery may find this just what they’re looking for.” ( Booklist)

Elaine Benson is hired to help Moira Madison write a memoir of her life, particularly her years in the army during WW II. She has to move into the Madison household in rural Canada in order to interview Miss Madison and review boxes and boxes of old letters in order to help Miss Madison write this memoir. But as she starts work, she finds a few odd things going on in the house. First, Moira’s personal assistant, Ruth, is quite hostile to Elaine and definitely wants her to leave, as do other family members who are afraid that Moira will spill some family secrets in her memoir. There are weird feelings for Elaine at the house, and odd things happen. She finds out that another writer was initially hired to help Moira, and that writer drowned under suspicious circumstances. It becomes clear that there are hidden secrets there, and that someone would be willing to commit murder to keep those secrets. The narrator is one of the best and does a wonderful job with this novel, which moves along quickly. A good fast read.

Vicky Delany most always has good stories and plots which I really enjoy. Unfortunately (for me anyway) she can't resist the temptation to over-pad many emotional scenes or plot points til the emotions lose their . . authenticity and-or dignity . . . trying to make it too juicy like cheap shot sensational books do because the story, movement and characters aren't interesting enough to otherwise hold interest. But Delany's story and characters ARE interesting enough so the overblown or drawn out emotional scenes are appreciably weakened rather than strengthened by such ploys. Same with some of the plot points - dragging them out, I supposed to make them more riveting but really it just makes it boring and irritating.
Still the story (ies) in Burden of Memory are good, good characters and for some wonderful reason she doesn't OVER-DO emotions or plot points at all in the history sections. They seem very authentic to me and convey, realistically but without unnecessary gore or horror the reality of war. You get the feeling of actually being there - finding the strength and heart to do what needs to be done.