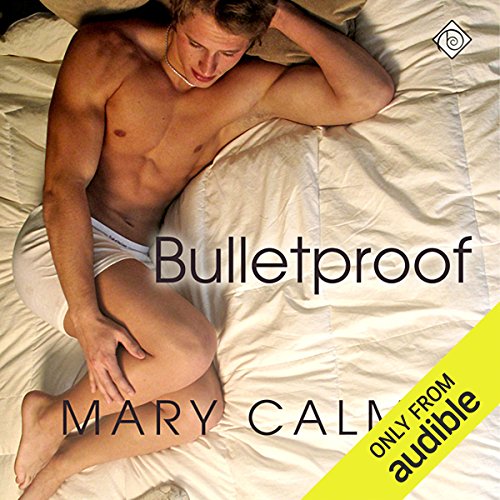 Jory Harcourt doesn't have to go looking for trouble. Wherever he goes, it seems to find him - particularly when his partner, Sam Kage, is working undercover on a federal task force.

After the recession forces him to close his business, Jory goes to work as a matchmaker and event planner. From there, it's only a matter of time before his big mouth and up-front attitude make him the rope in a tug-of-war between a trust-fund baby and a drug-smuggling criminal. Then, as if that situation weren't delicate enough, Jory's undercover lover shows up working for the smuggler.

Between the men who want him and the men who just want him dead, Chicago is getting a little crowded for Jory, so on the advice of his brother, his boyfriend, and the FBI task force, he heads for Hawaii...where a serious accident threatens his quality of life. Can Sam and Jory keep the faith and prove that their relationship really is bulletproof?

Absolutely not. Paul Morrey wasn't a stellar narrator for the first two volumes, but at least you could tell when Sam was speaking...he had his low gravelly/growly voice down pat.Dane had the most ridiculous accent, but at least I could tell who was speaking. Gelder is a reader, not a narrator. I had to quit listening and drag out the book because he was ruining the story.

The continuation of the "epic" love story between Sam and Jory. I love these guys.

Who would you have cast as narrator instead of Jeff Gelder?

Well, I especially loved the part where Jory and Sam meet up in the dark behind the club. Oh.My. :)

A wonderful continuation of the love story. Too bad Gelder ruined it for me.

I love almost all of Mary Calmes' books. Jory and Sam are one of my favorite couples. I LOVE Jory and the way he looks at life, he is so much fun. But I hated the narration.

The relationship between Jory and Sam.

I don't understand why they switched from Paul Morey, he was great as the narrator for the first 4 books. Mr. Gelder has a very nice voice but there was no deviation in his tone for the different characters. Sam is suppose to have a deep, gravely voice and in this book he had anything but. It detracted from the story b/c I have read the all books and listened to the first 4 books with Paul Morey. It really ruined it for me and if Mr. Gelder does the final book, I will not purchase it.

No. I read the series as they came out.

What was one of the most memorable moments of Bulletproof?

I really enjoyed the entire book but Jory& Sam together is always great.

Narration. I had a hard time figuring out who was speaking. There is no deviation in tone between characters. The only other complaint I have is the awful music played in between chapters. Forget trying to relax and read this.. The music makes it impossible.

If you could take any character from Bulletproof out to dinner, who would it be and why?

I have had this book since March 2013, but after listening to Matter of Time Vol. 1, and immediately followed by A Matter of Time Vol. 2...I found myself sick of the characters and did not want to continue with their journey. So here it is July 2015 and I can say that after 'a matter of time' I finally remembered I had the book and listened to the story. I think Amy Lane stated in her review of this book that Jory's character matured a bit in this story and I agree. I was not put off by Jory's scatterbrain nor Sam's dominance...in fact the love between the two was mutual, which is something that I didn't see in the first two books. So, I like this book (though the premise is a bit farfetched---there is not that many gay rich men falling over one dude---sad to report) and would recommend, although I would advise a little bit of time between stories. I just discovered there is a #6 to this series...after a matter of time, we will see :-)

Would have been better with a different narrator.

I would change the narrator. He has a nice voice, but his inflections at the end of sentences was a bit irritating. You know that thing where some people talk like each sentence is a question? That's how it sounded to me. Sentences that do not end with a question mark sounded like it did. Also, there was very little variation between character voices which made it difficult to tell which character was speaking in scenes where there are several characters talking and there weren't narrative clues like 'x said' then 'y said'.

Other annoyances were how the narrator spoke too fast, where he stumbled a few times and repeated some words or seemed like he was about to say something else.

Less of the whole 'Everybody Loves Jory' thing. It was getting really tiresome with how everyone just loooooooves Jory, wanted to sleep with him, or look like him, how everyone just kept telling him how beautiful, perfect, etc. he is. It would have been nice if Sam Kage had more scenes rather than all those random characters.

Would you be willing to try another one of Jeff Gelder’s performances?

Not unless he can change the way he narrates. Don't talk as fast, don't end sentences like they're questions when they aren't. Or having weird pauses within a sentence. He actually did Sam's voice pretty well, which is what stopped this from getting 1 star for performance.

Did Bulletproof inspire you to do anything?

Nope. Not really that kind of book.

I wouldn't mind buying this again if they got the same narrator that did the first 2 books (Morey) to re-do this one.

For the first four books in this series, the audio version was certainly better than the print, due to a fantastic reader. This book, however, was pretty poorly read. I find myself wishing I had read the print version instead.

It was funny and lighthearted, while still portraying a great relationship between Jory and Sam.

Who would you have cast as narrator instead of Jeff Gelder?

The narrator for the previous books in this series was fantastic.

If you could rename Bulletproof, what would you call it?

Hmm... think this was a great title for the book, so I wouldn't change it.

What made the experience of listening to Bulletproof the most enjoyable?

I love very one in the book...

What other book might you compare Bulletproof to and why?

Would you listen to another book narrated by Jeff Gelder?

I have and some books hes great but I rather the other narrator from the first two narrated this book. He had all the voices right so I hope the next book he is back!

Some parts made me laugh Jory is funny....

Ruined by the narrator!

Gelder was terrible. He read the lines as if he were speed-reading and in staccato bursts. It was grating and turned a good follow-up to the series into a Did Not Finish. I now have to just make do with the Kindle book and check first before I buy the audio for But For You when it comes out. If it's not Paul Morey, I'm not buying. In fact, I'm going to ask for an exchange for Bulletproof since I could only tolerate one page:(

This installment in the Matter of Time series takes place three (or so) years after Matter of Time Part IV. Jory and Sam are still happily married, Jory is still a trouble magnet, and he's still as zoned out, snarky and wonderful as always.

The blurb really does give you a great idea of what's happening in the story, so I won't rehash. Even though Sam and Jory are separated for 2/3rds of the book, I didn't actually mind because the story flows so effortlessly. As always, Jory, being Jory, manages to find trouble in the most unlikely of scenarios, which ends up bringing him in a direct conflict of paths with Sam's undercover assignment.

“Jory, most people, when hit men come after them, they get killed. You’re lucky, spontaneous, and your guardian angel is overworked and way underpaid.”
“I know, right? My angel walks into a bar and the other angels are like, ‘Oh shit, that’s the poor sap that’s got Jory Harcourt. Look at him, he started drinking again.’”

What I loved more than anything else? Jory actually saves Sam's ass, not once, but three times. Ha! Actually, Jory saves the day quite a lot in this one to my everlasting joy.

For the narration, I love the character voices Jeff Gelder uses for Jory and Dane, but I'll admit I definitely prefer Paul Morey's growly Sam character voice. That being said, Jeff Gelder just doesn't do a great job with the narration. In parts he loses inflection and his reading becomes flat at times. Worse, he self-corrects and mispronounces words often (example: saying "prostrate" instead of prostate.) Argh!

Though this is my second favorite story in the Matter of Time series, it's my least favorite audio. The flubs and issues aren't enough to nix it and it's still a good listen, but you should definitely be aware before buying if that sort of thing drives you bonkers. For me, my love of the story outweighs my annoyance with a few parts of the audio, so it's not an issue, and I re-listen to the audio book every few months. I just love this story, and Sam and Jory, so much!

I love this series. I love all the books in the series. I love the storylines and the characters. Sam and Jory are One of my favorite couple. I have read all of the books several times. The only problem I had with this book specifically in audio is that The narrator for this book is not the same as the first two books. I think it throws the story off. I had to rewind the story several times to figure out what character in the story was talking since the narrator uses the same voice for every character. If I had not read the stories before I would have been even more lost. Several words were also mis-pronounced as well. This is not the best narrator that could have been used. But I do love the story.