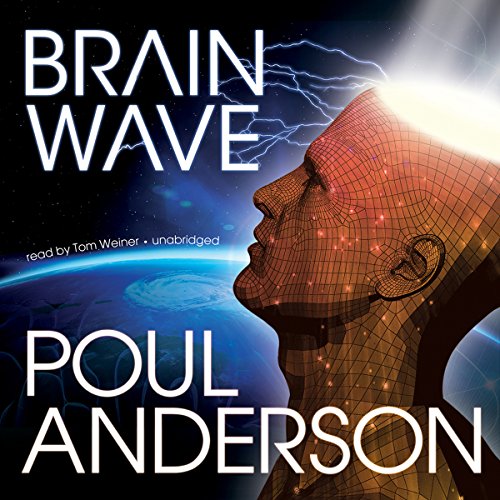 For millions of years, the part of the galaxy containing our solar system has been moving through a vast force field that has been inhibiting certain electromagnetic and electrochemical processes and, thus, certain neurotic functions. When Earth escapes the inhibiting field, synapse speed immediately increases, causing a rise in intelligence, which results in a transfigured humanity reaching for the stars, leaving behind our earth to the less intelligent humans and animal life-forms.

This is a transcendent look at the possible effects of enhanced intelligence on our planet.

Interesting "what if..." and speculation about us

This is an interesting speculative work about "what if...humans suddenly became much, much smarter all at once?" It takes us some pretty interesting places, although I'm not sure I agree with all of the author's conclusions.

The plot is pretty simple: One day, something happens to the laws of physics and nerve cells suddenly become more efficient. Humans (and, as we see, other animals as well) become much more quick-witted and intelligent. What happens to society? There are several parallel threads, the main ones being the story of Dr. Peter Corinth, physicist and that of Archie Brock, farm-hand.

It was written in the 1950's and there are some attitudes about the role of women in society (especially Peter Corinth's wife) and how some of our society is based around the idea that very smart people are unwilling to do some menial and tedious (but essential) jobs. (This concept is also explored in Aldous Huxley's Brave New World.) It also examines what it means to be "human" and what happens when not only the people but the animals become brainier.

Oh, and I like Tom Weiner's narration....he does a good job with this.

Although written decades ago, this is a remarkably fresh story with wonderful speculations about how the world would change if everything with a nervous system suddenly started getting a lot smarter. The idea shows up a few decades later, highly modified, in Vernor Vinge's Fire Upon the Deep, but there it plays out on a more galactic scale. In Anderson's version we get a more intimately human look at what our intelligence means to us. Well narrated too boot.

Poul Anderson is one of my favorite SF writers from the Golden Age. I loved his stories of David Falkayn, Chee Lan, Ensign Flandry and a host of other larger than life heroes that inhabited the Polesotechnic League Universe and the future human empire. And even when I first read Brainwave back in the seventies, I loved it. There was something there that made it fresh, original, full of promise and certainly expansive. This reading, however, stole that away from the story. Several times I almost concluded that since I had already read the story and knew the ending, I could give it up and go to my next book, but loyalty to the author and a desire to see how the narrator completed that final scene generated in me a hard-nosed forbearance. I have not decided whether it was a wise choice.

I can only marginally recommend this narration. It has its good points but it also moves along a bit lifelessly. If you are so much in love with Science Fiction that missing even one novel is unacceptable, then pick this one up. If Science Fiction is not your passion, then it would be best if you moved on to something a little more mainstream and comprehensible or you, too, may find yourself wondering whether you should finish this narration.

I appreciate the decade this was written has some inequitable social norms. But it’s saddening that men gain amazing intellectual powers and fly to space etc, while the major female character can’t handle the power of deep thinking, goes mad, gives herself electric shock therapy to go back to normal, and then the happy ending is that she goes to live with a colony of uplifted idiots and animals. It’s a real treat…

I love Anderson but this book is bad

I love Anderson, and the premise is great, but this book is just awful. This book has none of the standard fiction elements like tension, conflict, character development, and so on. Instead it's one of those scifi books where the author had an idea and then just uses fiction to tell us about what he thinks about it. (Characters sit around and expound their philosophies to each other, etc.) Also, at times the book seems to be premised on the odd idea that anyone who does manual labor for a living must not be very intelligent, and that intelligent people would refuse to do that sort of work. That's factually incorrect (didn't Anderson know that large numbers of people work for money?) and on the verge of being offensive.

Written in 1954 this book is very dated. Everyone, human and animal gets smarter. One poor housewife who was pretty but stupid, gets smarter, but the poor thing just was not built to be smart and she goes crazy. A guy who is almost a Moron, gets smarter and he becomes a great leader. There is one woman who has a job, she is handsome not pretty and she is an office manager, certainly not a scientist. PA tries to speak out against the atrocities against black, but in so doing, kind of admits that he thinks blacks are not as smart as whites.

PA also believes that when people get smart they leave the cities. There is the usual 50's bitch about using atomic bombs. People who drive trucks, work on assembly lines or do manual labor are stupid and when they get smarter they rather starve to death then do these jobs.

They story does move along very quick and there is some interesting talk about intelligence and what is it really. A like all the farm scenes and how the animals reacted to be smarter. An updated version by Robert Sawyer would be good.

I really enjoyed this book. My one outstanding question is what about the rats and mice. Already smart to start with they could become scary.

the story overall was good. some parts of the story seem to lean towards a specific sort of bias as to how people would react to a sudden increase in thinking capacity but I guess that's to be expected when reading, or in this case listening, to sci fi stories.

When did he write this epic science fiction when smoking was ok, when it was in a story to hop into a spacecraft - travel other parts of the universe (ignore the laws of time displacement) expected to arrive 3 months later and have a wife go nuts because the whole world changed and she didn't? The author didn't even consider checking the other planets in our own part of the galaxy and everyone is still the same age except for coming back 3 months late and Sheila decided to kill herself by means of sleeping pills then electrifying herself?

After Jules Verne wrote his novels other scifi writer's (for reasons beyond my understanding) needed to have time and space passed by added that smoking is an important part of the storyline and to kill animals that understand what you are saying makes it bad? In my world I still eat chickens but most of the time I eat vegetables and fruits.

Maybe 3 times of each year I will gladly eat a burger. If I can kill it I can eat it and that's my personal rule. Fish and chickens are part of what I can kill and only a few times I wonder off for a burger. I know I cannot kill a cow so my rule has a problem with eating meat but most of the time I'm ok, but I digress.

There seems to be a place in time where fantasy seems to be dominate. Science fiction takes a back seat, but I think I remember reading another story about better writings that is better than this novel! So, I would try other stories from this author and the narration was very nice and witty and listening to this book wouldn't be the worst book I've experienced compared to other novels.

This book started slow but grabbed my interest quickly. The author weaved the separate experiences into a nice web. The thoughtfulness of each character and chapter made me smile, grimace and cheer.

The idea for this book is brilliant but I don't really feel that Poul Anderson did the idea justice, the story seemed to skip along the surface of some really intriguing ideas without ever really delving into them. I'd love to see what someone like Peter Hamilton could do with this idea, it just didn't seem very well explored.

Couldn't get past the dated sexism and gave up

Interesting concept, but clunky writing utterly embedded in a male chauvinistic world view.
Not just because the majority of the main characters were male, (sadly common in Sci Fi), but how the women were described and talked about.
Given that the core theme of the book is intelligence the author was writing from the internal perspective of women and clearly thinks my half of the human race is pretty limited and trivial.
I gave up at the point when two male protagonists were discussing a female co-worker, how she couldn't keep a man and had turned 'cold'.... Reading it felt like I was being insulted repeatedly so I'll never know whether the plot was any good.
You could say it's of it's time, deal with it, or you can go find an Octavia Bulter book instead...

Hold up p well after all these years

The Earth, in its orbit around the centre of the galaxy, moves out of a (natural?) force field that suppresses intelligence and mankind has to adapt to a maybe five-fold increase in IQ.
I remember reading this forty years ago .I haven’t thought much about it since, though I remember thinking about it a lot the first few years after discovering it. But, as soon as I saw the title, I recognised and remembered it.
I remembered it as a short story and was surprised at its five-hour length, I think this is an indication of how the story gripped and absorbed me.
This story holds up very well, and is excellently narrated. I had a vague remembrance of the shape of the story, but this didn’t hamper my enjoyment of it at all.

a little dated but clever and original

given that it was written best part of 50 years ago, it's really a very good listen.