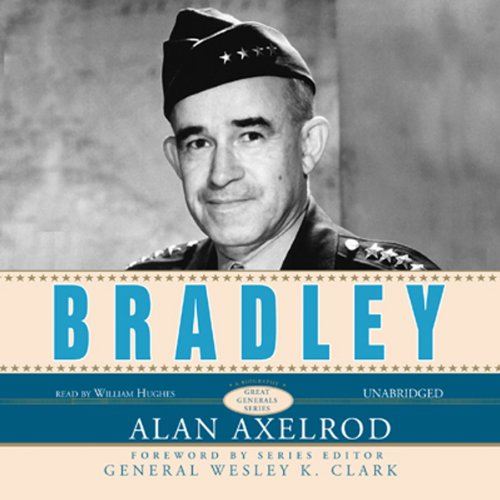 Known by his troops in World War II as "The GI General" because of his close identification with the men under his command, Omar Bradley commanded the U.S. Twelfth Army Group in Europe. By the spring of 1945, this group contained four field armies, 12 corps, 48 divisions, and more than 1,300,000 men, the largest exclusively American field command in U.S. history.

A mild mannered man, General Bradley created the impression less of a soldier than of a teacher, which he was during much of his early career in the Army. He earned a reputation as an eminent tactician and rose through the ranks to become a five-star general.

Axelrod creates an excellent picture of a soldier's general. A leader passionate about his men. Knew that! War correspondent Ernie Pyle gave him that nickname. The book is a lot about his early life ,USMA '15 as well as middle life between WWI and WWII. Then, he finally gets a command and it's the middle of WWII. The book spins a lot of wheels around his commands and movement between confusing Army commands in WWII. For example, what's an Army Group? It's a group of Armies. i though that the US Army is an Army? Not so. Anyway, confusing to us non Army folks. At the end, author spent very little time, a sentence or two about his post WWII time, as the VA chief, first NATO General and the first Chairman of the Joint Chiefs--two significant achievements glossed over. No words at all about his retirement. The book just ended.

This is a typical well researched paper that does a very food job of pointing out the importance of the man Bradley. I enjoyed it very much but as I listened to it I wanted the author to give me more details about the conflicts that existed between the allied Generals, ie Patton, Ike Montgmery. The author does a very nice job of taking us through Bradleys career and brings out many points that are not generally known about the man. Well written and interesting, I recommend it to young military officers and NCO's, here is a man that can be a model for excellent leadership.

This book creates an excellent picture of a soldier's general. A leader passionate about his men. Not a brilliant tactician or with a feel for war like Patton, but an intelligent and talented general.

I liked the Patton biography as well, and hope the author continues this series with Eisenhower, McArther, and others.