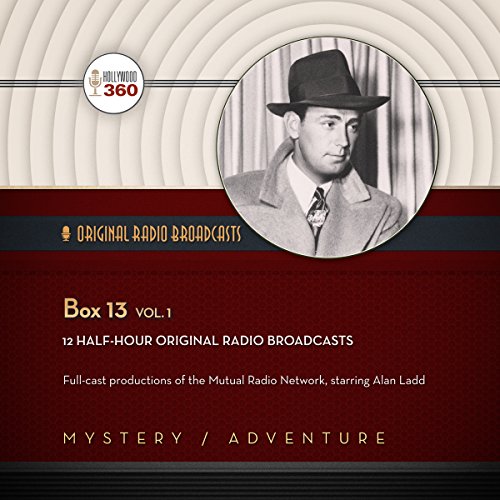 Holiday always had more adventure than he had originally sought because those who responded to his ad never revealed all of their glorious, unusual, and sometimes sinister details until they met in person and the adventure had already begun. Silvia Picker played Holiday's scatter-brained secretary, Suzy. Suzy added touches of humor to the mystery-adventure and nail-biting storylines.

Box 13 was produced by Mayfair Productions, a company run by Alan Ladd and Richard Sandville. The name came from Mayfair Restaurant, which Ladd and Sandville owned during World War II. In addition to producing Box 13, Ladd also wrote some of the scripts.

A Box of trouble.

I always liked Alan Ladd. This was a great show for him. A writer looking for martial for his novels, places an ad in the newspaper. The ad says he is looking for adventure and will help anyone who answers his ad. Of course this is a recipe for disaster, because he doesn't know what kind kooks will answer his ad. Some of them are good people needing help. But some the others are bad guys wanting to use the writer as a fall guy for their schemes. In one case a serial killer answered his ad. Lads character is probably not the smartest detective on radio, but the show is still very entertaining. I hope they will release more of this show soon.

While I love Box 13 stories, this "book" is repeat

I bought one "book" of this Box 13 that had 54 chapters and thought these stories would be different, but they are not, not at all. All 12 stories in this listen are a repeat from the one I have that is 54 chapters. So I am going to try to return this one since it was a complete waste for me to purchase it. Stories are great, performance is great.