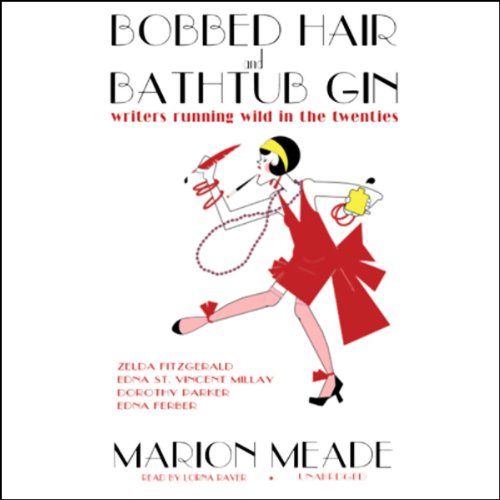 This is an exuberant group portrait of four extraordinary writers, Zelda Fitzgerald, Edna St. Vincent Millay, Dorothy Parker, and Edna Ferber, whose loves, lives, and literary endeavors captured the spirit of the 1920s.

Marion Meade re-creates the aura of excitement, romance, and promise of the 1920s, a decade celebrated for cultural innovation, the birth of jazz, the beginning of modernism, and social and sexual liberation, bringing to light, as well, the anxiety and despair that lurked beneath the nonstop partying and outrageous, unconventional behavior.

The literary heroines in Bobbed Hair and Bathtub Gin did what they wanted, said what they thought. They drank gallons of cocktails and knew how to have fun in New York, the Riviera, and Hollywood, where they met and played with all the people worth knowing. They kicked open the door for 20th-century female writers and set a new model for every woman trying to juggle the serious issues of economic independence, political power, and sexual freedom.

In a style and tone that perfectly captures the jazzy rhythms and desperate gaiety that defined the era, Meade tells the individual stories of Parker, Fitzgerald, Millay, and Ferber, traces the intersections of their lives, and describes the men, including F. Scott Fitzgerald, Edmund Wilson, Harold Ross, and Robert Benchley, who influenced them, loved them, and sometimes betrayed them. She describes their social and literary triumphs (Parker's Round Table witticisms appeared almost daily in the newspapers and Ferber and Millay won Pulitzer Prizes) and writes movingly of the penances they paid: the crumbled love affairs, abortions, depression, lost beauty, nervous breakdowns, and, finally, overdoses and even madness.

A vibrant mixture of literary scholarship, social history, and gossip, Bobbed Hair and Bathtub Gin is a rich evocation of a period that continues to intrigue and captivate listeners.

"An enjoyable and informative read." (Publishers Weekly)
"Reading Meade's book is like looking at a photo album while listening to a witty insider reminisce about the images. Her writing is bright, her language charged with gritty details....Instead of portraying them as austere literary figures, Meade makes the women seem like part of the family." (San Francisco Chronicle)

The people in this book prove the old adage that truth is stranger than fiction! This book gives such in-depth descriptions of events and personalities that, although the book really focuses on the 1920's and cannot be all-inclusive given the number of characters covered, I feel as though I have a very good sense of who they were. It was heartbreaking, funny and gossipy. I highly recommend this book!

This book was a romp through the 20's with some of it's more interesting characters. It's fascinating to find out how very human and fragile legends really are. This group lived on the edge but they had the problems of ordinary people too. What makes it so much fun is to see it all through their creative and usually very humorous points of view!

I chose this book as a followup to the Amazon series Z. It follows the story of each individual woman, year by year throughout the twenties. With the exception of the Fitzgeralds, I had little, to no knowledge of the other writers. Initially, each story was difficult to follow, but as the characters became more familiar, the book moved along very nicely. It was a lovely introduction to the wit of Dorothy Parker.

...and nice capsule biographies, not only of the four main figures--Edna Ferber, Dorothy Parker, Zelda Fitzgerald, and Edna Millay--but all the best writers of the time, including F. Scott, Edmund Wilson, and of course Hemingway. Zips along at a high rate of speed, pausing now and then to make you laugh at the zingers these ladies could produce.

Ended up enjoying it

It took me a little while to adjust to this book partially, I think, because it reads more like fiction than a non-fiction. Also, there are so many people that someone of a newer generation may not recognize names like Edna Ferber, etc. But once I got started, I enjoyed this book very much... especially the parts about Zelda and F. Scott Fitzgerald. There were so parts that are just too funny... like about F. Scott Fitzgerald being chronically obsessed with his small ****. I thought this was a splendid book and well-narrated.

I love books like this. Getting behind the scenes of a crazy time. The tone of the book pulled me in right away. Highly Recommend.

Lorna Raver brings Marion Meade 's subjects alive! All interesting in their own right, these incredibly facinating women are made even more so by Marion Meade's excellent writing style and insight with perfect delvery by Lorna Raver's narration.
I recommend this book to anyone interested in
the lives of Dorothy Parker, the Fitzgeralds, the Algonquin Round Table clan, Ferber, and Vincent.
I'm going back for a second read/listen of the entire book again, after i finish with this.

What a creative mind!

Love how this book was written. It was so fun getting to know these infamous writers. Great narration too, added 1920's spunk to it. I was thoroughly entertained by this light and amusing read, and I got to see one of my favorite poets, Edna St. Vincent Millay, in a biographic way.

Started out interested in the NY City backdrop, however this reads like reality TV of the 20's. Uninteresting details about recognizably important folk; none the less Boring! Narrator was equally dull. Don't waste your time unless you are addicted to inconsequential drivel. A true waste of audible credits.