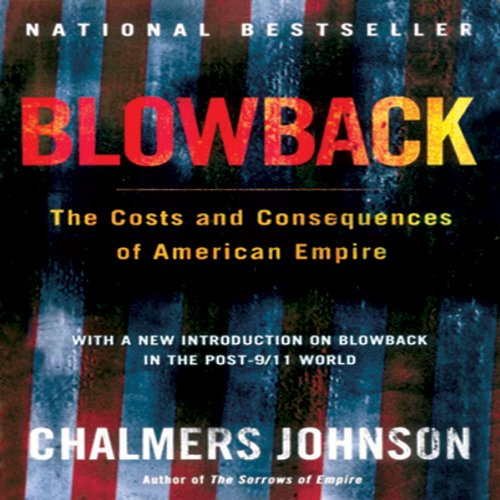 The term "blowback", invented by the CIA, refers to the unintended consequences of American actions abroad. In this incisive and controversial book, Chalmers Johnson lays out in vivid detail the dangers faced by our overextended empire and reveals the ways in which our misguided policies are planting the seeds of future disaster.
©2000 Chalmers Johnson (P)2007 Blackstone Audio, Inc.
"Boldly provocative....A useful and timely alert." ( The New York Times)
"A straight-talking analysis of America's global conduct during the Cold War and since, and what we're going to pay for it." ( The Nation)
"It is indeed a new post-Cold War ballgame, and Johnson's warning, if it were heeded in Washington, would help keep America safe from the temptation of untrammeled power." ( Newsday)

If Dr. Johnson is correct about what's going on behind the scenes of the body politic, we are all pawns and puppets (and stooges?) in a feeding frenzy of money and power by the rich and powerful.

It is at least unsettling. For me, being a cynic by nature, it's frightening.

The pure information in this book is astounding. The cause and effect descriptions given make you want to pay even more attention to the world around you. Hearing some of the key players mentioned in world affairs and the decisio s they made back in the past makes me look at them with renewed interest as some of those figures are relevant today.

If you ever thought that &quot;they hate us for our freedom&quot; you really should listen to what's in Blowback. From the CIA overthrow of the popularly elected Iranian president in 1953 until now, the government's policies and agencies purposefully interfere in the affairs of other countries, causing the loss of everything we supposedly hold so dear in our country, life, liberty, and the pursuit of happiness. We are just like every other empire that existed that will eventually fall due to corruption and the treatment of the people it subjugates unless &quot;we the people&quot; understand what our government is doing and put a stop to it. AUDIBLE 20 REVIEW SWEEPSTAKES ENTRY

Reader is TERRIBLE / Book is good

The reader speeds through the book as if it's a competition of who finishes first. The last 15 minutes is the only point of the audio when the reader slows to a pace that is comprehensible. This is a heavy read .. Not a fiction book. Slow down so the listener can grasp the information!

This Book Has Not Been Updated Since 2000

It's important to warn you that there is nothing in this book written after 2000 other than one of the introductions. In other words it claims that North Korea hasn't detonated a nuclear weapon, the U.S. GNP is pushing $7 trillion dollars, heck the trade deficit with China is actually a surplus in favor of the U.S.
Other than that I found this to be a poor excuse for an informed debate. Anytime you have a theory that leads you to believe that the U.S. caused the Asian Financial Collapse of 1997 just so that 10,000 sailors can get half priced prostitutes in Thailand your critical thinking skills have gone astray.
Johnson pulls a couple of niftty little tricks in this one that are jaw dropping. His three main foci are China, Japan and the U.S. At least China and Japan get the briefest benefit of sympthy for being under the control of imperialism. The U.S. gets no such reprieve. The U.S. is evil from start to finish...even when it provides the support to strengthen other nations.
It's really hard to grasp the fundamental idea Johnson is trying to push because if he pays attention to what he's saying, no matter what a country does, there's going to be some type of resoponse. This is why you build military strength, make friends...even if that means lots of economic support...and you intimidate your enemies into not messing with you.
Johnson, while drawing on a great wealth of knowledge about Asia, seems to have a very selective memory. That's how China only meaningfully engaged Vietnam over the Spratly's in 1992. If you don't know the political situation around Japan, you would think the Japanese didn't like the U.S. Yes the US military personnel need to be better behaved, but neither Korea nor Japan are willing to take a chance with their national security and expel the US military. Korea already knows happens once the US sphere of influence runs to the east of the pennisula. See The Acheson Line.
Avoid this book at all costs. It's cheap Chomsky.