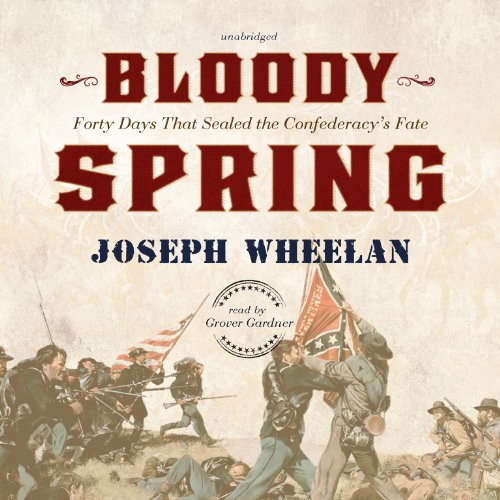 A unique and compelling examination of the Civil War's "turning point" - 40 crucial days in the spring of 1864 that turned the tide for the Union.

In the spring of 1864, Robert E. Lee faced a new adversary: Lieutenant General Ulysses S. Grant. Named commander of all Union armies in March, Grant quickly went on the offensive against Lee in Virginia. On May 4th, Grant's army struck hard across the Rapidan River into north central Virginia, with Lee's army contesting every mile. They fought for 40 days until, finally, the Union army crossed the James River and began the siege of Petersburg.

The campaign cost 90,000 men - the largest loss the war had seen. While Grant lost nearly twice as many men as Lee did, he could replace them. Lee could not and would never again mount another major offensive. Lee's surrender at Appomattox less than a year later was the denouement of the drama begun in those crucial 40 days.

Skip this! Get Catton's Stillness at Appomattox

Thankfully I have read enough Civil War history to recognize the absurdly myopic and misleading nature of this story. This is a superficial, skewed version of history, with cherry-picked facts thrown in to show that Grant carelessly whittled on a piece of wood, while he caused the unnecessary death of tens of thousands of his soldiers.

If one didn't know the South lost the war, it would be quite a shock to listen to the 5 minutes of the epilogue and learn that the North won! As a southerner, I respect Lee as much as anyone, but I also respect the complex difficulties and triumphs of US Grant. I suppose this book might be appreciated by those with rebel flag bumper stickers that say "the South will rise again". Regardless of sentiment, this history is incredibly misleading and superficial!

I implore anyone reading this review to skip this book, and instead download Audible version of Bruce Catton's "Stillness At Appomattox"!!
It is an exceptional work that covers this same topic, but with the realities and complexities that actually took place in the last year of the Civil War. There's blame and praise to go around, but is there any true glory in the Civil War? Not when Americans fight Americans, brothers against brothers, etc. Catton's other civil war books are incredible as well. He shows the best and worst of both sides! The abolition of slavery is the one overriding glory of the war. The rest of it is sad and painful. War is bloody and tragic. And Grant was not the "butcher" this book made him out to be. Lee was a superior general, and to win the war, the Union did lose an unacceptable number of troops. But the lives of men on both sides were the sacrifice that the forefathers set into motion when they ignored the fact that the idea "all men are created equal" was not compatible with the institution on slavery. However, in the eyes of the actual soldiers and generals of the north, Union troops sacrificed their lives to keep America united! I'm grateful for that sacrifice!

This book ignores the real history, and just blames Grant for Union slaughter. Then it wraps up by telling us that he, in fact, won the war. The whole thing is a mess. Bizarre and illogical. Simple and skewed. This is not a work of history worthy of any praise!

Most of what I read and study about the Civil War has to do with the western theater. To me, Sherman’s Army always had a certain romance to it, which I could never find in reading about the army of the Potomac. Even after countless visits to Gettysburg and Antietam, Spotsylvania, and Fredericksburg, I just didn’t see the fascination. It was Sherman’s Webfeet who won the war, not a bunch of paper-collar feather beds, whom found themselves in winter quarters each autumn only to emerge no less refreshed the following spring. This book helped me in that regard. It helped me understand how 1864 was so pivotal for the armies in the east and how Grant brought it all together. So, I guess I never gave Grant enough credit.

If you’re a student of the war like I am you’ll find this an excellent read, and even if you’re a history buff, you might find yourself immersed. There is almost a Bruce Catton tone to Bloody Spring, which lends to the authenticity though I always found Catton to be too romantic. There are times when I feel the book bogs you down with “Battles and Leaders” type dialog but Wheelen does an excellent job of keeping you engaged by citing accounts and anecdotes from soldiers in both armies. You will not be bored.

I also have been finding myself selecting books that are read by Grover Gardner. Not all but it seems the last several anyway. I like how he reads and I like the sound of his voice. The tone and manner in which he tells the story keeps my interest and will not disappoint. Now, if he could only take over for the Wall Street Journal Morning Read.

Do yourself a favor and put this one in your library. And follow up with Jay Winik’s April, 1865 (I didn’t see on Audible though I have in my collection). It will help bridge your desire for closure and the end of the war when this one is complete because ending the book 5 months short doesn’t do the reader, or the author justice.

I was unprepared for this sort of audio

Would you try another book from Joseph Wheelan and/or Grover Gardner?

Would you ever listen to anything by Joseph Wheelan again?

My review does not reflect the quality of this book but only my realization that if I were to truly enjoy this book and the authors research than I needed to read it in hard copy. Personally I would need maps and other reference to totally appreciate this title.

the Civil War without maps

Would you try another book from Joseph Wheelan and/or Grover Gardner?

The basic story was strong

Did Bloody Spring inspire you to do anything?

In the future, if I know the audio book would refer to so many different sites, I would get the book with maps- this was tough to follow on audio alone.

Robert E. Lee and Ulysses S. Grant were both aggressive fighters. This inclination to always be on the attack led to about 90,000 casualties between the Rebel and Union armies during just forty days in 1864. Wheelan's book gives the feeling of being present during this very bloody period of American history. This book is required of any history buff, especially those interested in the American Civil War.

Well-written but too many inaccuracies

I'm not far into this book and although the author is a good storyteller I've noticed minor but glaring errors that give me pause.

First, Rosecrans was not replaced by Grant at Chattanooga. Sec of War Stanton gave Grant, then in command of the Western Theater, the option of keeping Rosecrans in command or replacing him with George Thomas. Grant upon arrival chose the latter.

Second, Horatio Wright was not in command of the 6th Corps at the Battle of the Wilderness. John Sedgwick was in command until he later was killed at Spottsylvania.

The author quotes a rather blistering letter Lincoln wrote to Meade after Gettysburg and omits the salient fact that Lincoln did not send the letter.

Finally the author correctly states that Meade offered to relinquish command of the Army of the Potomac after Grant came East but then inexplicably states that Grant wisely declined the offer because Grant could not be in tactical command of that army while in overall strategic command of all Union armies. I say "inexplicably" because earlier the author correctly states that Grant indeed assumed de facto tactical command and regardless Meade's offer to step down assumed that Grant would replace him with a commander other than Grant. In fact in the same conversation Meade suggested Sherman.

There are more but I'll stop here. But it causes me to wonder how many inaccuracies I, as a novice, have overlooked.

Great interpretation of the Overland Campaign.

A very good and sober explanation with some analysis of the campaign that never seemed far off or purposely inciteful. I think this was a useful book for anyone wanting to study the battle more closely.

As always, Grover Gardner does a super job of reading books. This is a very detailed and easy to listen to story about one of the most significant period of the Civil War. Couldn't put the book down.