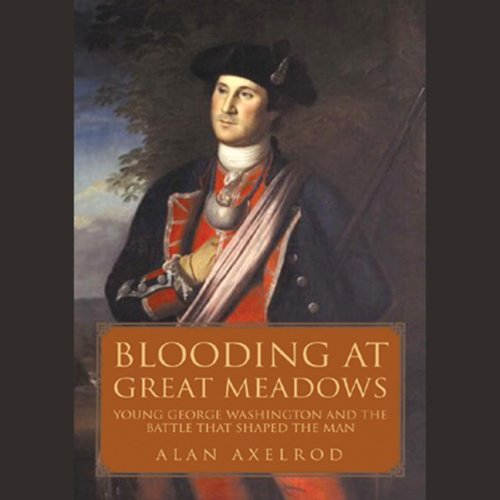 George Washington's ability to use the experience of defeat to achieve eventual greatness is an inspirational story for our own time.

History celebrates George Washington as the leader of the American Revolution and the father of his country. But what has gone previously unexamined is Washington's life as a 22-year-old lieutenant colonel who led 400 American militiamen against a bigger, more experienced French army and paid a high price. Not only did Washington lose over a third of his men, but the Battle of Great Meadows was also the spark that ignited the French and Indian War.

Yet in the midst of this bitter battle, Washington forged the intellectual, visceral, and spiritual aspects that enabled him to achieve all that he did in the years that followed. In this never-before-told account, historian Alan Axelrod examines the geopolitical, financial, and intensely personal issues that shaped the leader Washington would become.

What made the experience of listening to Blooding at Great Meadows the most enjoyable?

David Drummond does a wonderful job of reading Axelrod's well researched and readable book. I am a history buff who knows a lot about Washington's life and Colonial history, but this book enhanced my knowledge of his early period. A book like this peaks my interest in learning more.

Washington's flaws and virtues are discussed and related to his later character as general and president. There are no perfect men, but Washinton was able to learn from his mistakes to become a better leader and more noble man.

I know his doctors bled him to death. ‘Great Meadows’ is a poor substitute for Mount Vernon. Please identify ‘Great Meadows’.
Bye for now Glen ;-) PS: The 15 gold stars are well deserved.

I was a four or five year old child on my first visit to Fort Necessity. I have since that childhood visit conducted a lifetime hobby of studying the Battle at Fort Necessity and the Battle of the Monongahela (Braddock's defeat) as well as other noteworthy eighteenth century historic events within Western Pennsylvania.
I found Alan Axelrod's treatment of George Washington fair and factual for the most part, but too apologetic in total. The facts are truly facts - some of which I did not know. Unfortunately, many of the myths remained as myths after Mr. Axelrod conducted his research. For example, General Braddock's military column was not ambushed by the French/Canadian/Indian force from Ft. Duquesne. That is a myth regretfully passed along in Mr. Axelrod's book.
That said, I still found this book easy and interesting. I recommend this work as light entertainment on a lazy day/night.