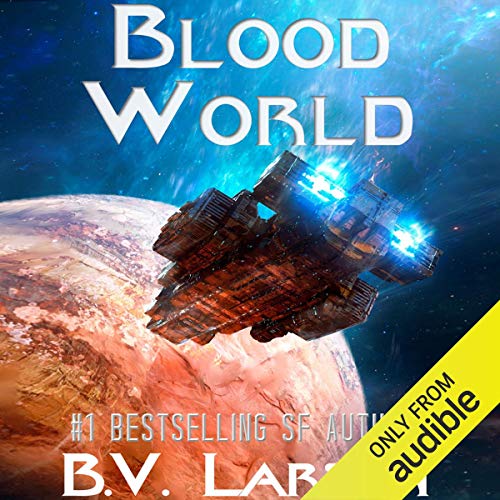 A dirty deal was struck. Humanity was allowed to keep 300 rebellious worlds. In return, we declared war on a powerful enemy from beyond the frontier.

A frantic build-up of forces has begun, but the task is hopeless. Seeking allies, Earth's legions are sent to Blood World. A planet on the fringe of known space, where the people only respect masters of combat. Earth's Legions must impress them, but other alien powers have been invited to join the contest. The prize consists of billions of loyal troops - Earth must win.

Fighting and dying and fighting again, the struggle is half-mad - but so is James McGill.

Blood World is the eighth book in the Undying Mercenaries Series.

BV Larson can call the worlds in the “Undying Mercenaries,” series anything he wants, “Steel world,” “Dust world,” “Rogue world,” “Tech World,” etc. but they are all “McGill’s World;” and everyone else just lives in them. If you’re looking for logic or a sense of world order than this series isn’t for you, James McGill sets the terms and everyone else just falls in place; but it’s the way he goes about things with his country charm and bravado that makes these stories entertaining.
“Blood World,” is typical of every other James McGill tale; he annoys superiors, dies a few times, chases women, and becomes the hero while thwarting any divisive plot that he doesn’t agree with. There is subject matter from previous books that tie into this story giving fluidity to the series, and, of course Mark Boyett gives another spot on performance as the voice of James McGill. Can’t wait for the next one

The story was enjoyable but in the grand scheme of the McGill world, one of the more pointless adventures. James's motivation throughout the story made very little sense, and the book kind of resets itself at the end so that nothing that the characters worked on really seems to matter. Instead of developing anything new, Larson continues to recycle the same old cast complete with lots of scheming from Claver who of course is in this book too. Larson does introduce "new" aliens so that James can sleep with them and then run off to the next conquest, its all stuff you have read seven other times and frankly now that James is a 40 year old man it just seems kind of pointless and depressing. I think that this series is like a TV show, its a cash cow for the writer and so he can't afford to actually do anything interesting with the franchise, he can't take risks or commit to any changes in the series dynamics because that might jeopardize its financial viability. Each book is like an episode, none of the characters can die, the plot can't really move forward, and we reset every time. Ultimately its just cheap scifi, and its enjoyable but if you want to read anything that commits to telling a sincere story you are going to have to find a different author.

The last one of these I'll listen to

Yeah, ol' James McGill was always a teenage brained idiot, who ceases to function at the sight of a woman's behind, almost any woman's behind. After decades in service it appears he has virtually no meaningful relationships except his mum, dad and kid. I reckon that anyone lead almost exclusively by their nethers would have been permed long before.

I get it, I'm not the target market for this but the stories themselves held my interest long enough to forgive a lot. But I've had enough of one dimensional characters, every woman undoing their suits as soon as he turns his attention on them. It may be what some blokes may think women are like, or even wish that they were, but this total lack of respect, consideration. selfishness and sheer mysogeny is beyond forgiveness. I don't need romance, that's not why I read these kinds of books, but the "Me Tarzan, you Jane" thing is lazy and dated.

This tale also had plotlines large enough to drive a battleship through. It's a shame really, but enough is enough!

Performance was good as always, but...

I actually stopped listening towards the end. James just hasn't grown as a character and when he did something that took me out of the book, again, and made me stop suspending belief in a work of fiction, I couldn't take it anymore.

I have listened to all of the undying mercenary books and this started to become a problem several back. Something has kept the author from allowing the main character to develop personally and professionally to such an extent it has become too hard to relate and thus too difficult to cheer for. It's sad for me because I had hoped to come back to these books and find something other than the exact same story retold with a slightly different twist.

So, if you loved previous stories and just want the exact same, just with the anti-hero/protagonist acting even more stupidly, getting unrealistically bailed out by women he exploits, and displaying zero growth as a character, then this book will make you blissfully happy.

Always Enjoyable Continuation of the Series

James McGill is my hero

What can I say, just when I thought it was over, # 8 comes out. This series is by far my favorite sci-fi guilty pleasure listen when I have the time to immerse myself in McGill's life & death & life & death....

I like the series. it's fun light fluff, but this one didn't go anywhere. it's a dud.

So, an entire slave race of genetically enhanced super-soldiers has recently been freed from their evil masters, and what do they do with their new feedom? They hold open tryouts to find new masters.

I've loved all of the previous Undying Mercenaries books, but this one was just plain dumb.

The sound editing is horrific. Sloppy at best. The story is weak. Just a filler book.

My patience is wearing thin

This book was mostly annoying and pointless. Seems none of the characters have learned anything new about McGill and show him the same disrespect as before. The women characters especially. These characters need to grow up already.

I have been sucked into this series... Can't stop listening, then in to the next

Blood World is the eighth book in the Undying Mercenaries series and has been a long wait for me while B V Larson pens other books in his various sagas. It's hard for me to decide which of his series I most enjoy, the Star Force or the Undying Mercenaries. The former has a more serious undertone while the latter, although perhaps more visceral and brutal in its descriptions of combat, has a slightly comic element to it in the James McGill character. One thing Larson tends to do with most, if not all, of his leading characters is to make them brave, clever and a real ladies man. I suppose you could say that he models his main lead males on the classic Captain Kirk mould. It's not terribly sophisticated or layered by modern standards perhaps but certainly makes for a more straight forward "go getter" type hero that keeps things simple.

So, what of the story? Well , if you are a fan of this series as I am, then I'd say it wasn't the best but it's by no means the worst. The difference between those two poles is very small in fact given Larson's ability to write solid action stories. It has pretty much all the elements we're used to seeing which makes for a satisfying read. However, I did find the premise a little confused. Earth has to put its fighting forces against those of other species to determine who gets the millions of troops waiting for a new master. wwe've seen these ferocious soldiers before but I'll not say here who they are. OK, so a competition to see who is the most worthy of the fighting force on offer. So, why does Earth get to send two representatives in the form of legions Varus and Germanica? Perhaps I've missed something here but I thought only one entry ought to be allowed. Other species in the competition were only represented once so I didn't understand what was the point. I do think Larson could've come up with a plot that made more sense in this regard .

Nevertheless, Larson keeps the action coming and he is adept at doing this. As ever, Larson comes up with imaginative aliens and detailed battlefields and worlds. Based on how this book ended, it is perhaps more exciting to see where the next book takes us as Earth prepares to do battle with forces that are fighting a civil war within the mighty Galactic empire.

Mark Boyett is here to narrate this and has been all throughout the series which makes for lovely consistency. He delivers all main characters just as we remember although I did feel that the early renditions of Claver were not quite right. He corrects this later in the book though.

Not too much else to say here. Larson delivers another satisfying if somewhat convoluted plot that essentially ticks all the boxes for an Undying Mercenaries story.

If you've enjoyed following the exploits of Earth's favourite Georgia Boy so far, you won't be disappointed!
The narration is excellent as ever.

A disappointing continuation to an enjoyable series. it seems as though James Magil is loosing his touch.

A great series, sadly no more for me to listen to.

I have really enjoyed this series. Some criticisms I read in reviews could be said to be true, but they are trivial. The revival machines are 'alien' technology and criticism that "the idea is silly" is entirely inappropriate. The main character does sometimes rankle with his womanising, but that is his character, and it is consistent throughout the series. In fact it leads to lots of plot twists. The story is fast paced, self consistent, full of twists and turns and entirely enjoyable. Perhaps not the most sophisticated of reads but I do not think that was ever the authors intention. In summary, ignore the criticism. This is a great series although I admit that I am upset I have no more to download. Come on Mr Larson, get those fingers typing and churn out some more please. I really want to know what happens with the Galactics faltering power structures.

I thought the best of the series had already been done....I was so wrong...total pleasure to listen to and I want more now!

much of the same

the story is getting repetitive and at times unbelievable. I still enjoy the concept but not sure how much more

gung ho Marines in space... what more do you need.

war & peace it aint but it bounds along for a fun few hours... cant wait for the next instalment

More laugh out loud moments that have continued through this series of books
If you enjoyed the others then this is a must
Enjoy :)