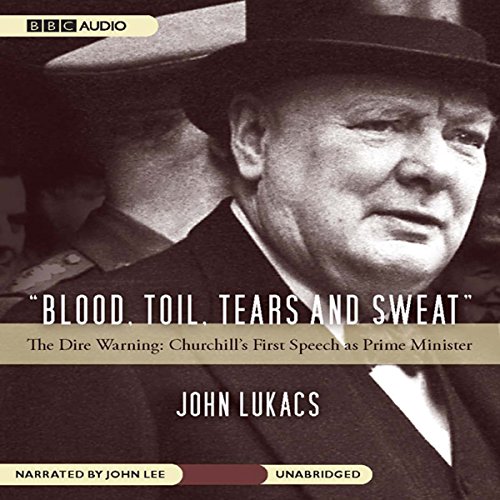 On May 13, 1940, Winston Churchill stood before the House of Commons to deliver his first speech as prime minister. Europe was in crisis: three days earlier, Germany had invaded France and the Low Countries. Facing only feeble resistance, Hitler's armies were rapidly sweeping westward.

Churchill had little support within the British government when he rose to address it that day. He lacked confidence, both in himself and in his ability to lead his nation to victory, for he recognized, far earlier than most, the military genius of Adolph Hitler and the potency of the German military.

In Blood, Toil, Tears, and Sweat, the eminent historian and master storyteller John Lukacs recreates this pivotal moment in world history, and reveals Churchill as he has rarely been seen before: as a man both unsure of himself and deeply fearful of his nation's defeat.

excellent narration by John Lee, as always! Churchill was a great orator, his speeches were inspiring!

The best of writers and narrators

John Lukacs is an unfailingly insightful historian, with his clear-sighted analysis always on target. This work brings us to see the bigger picture that Churchill knew, the long view, that most could never envision. John Lee compliments this skill with a perfect understanding of the text, and with perfect emphasis. A delight in every way for repeated listenings, and deeper learning.