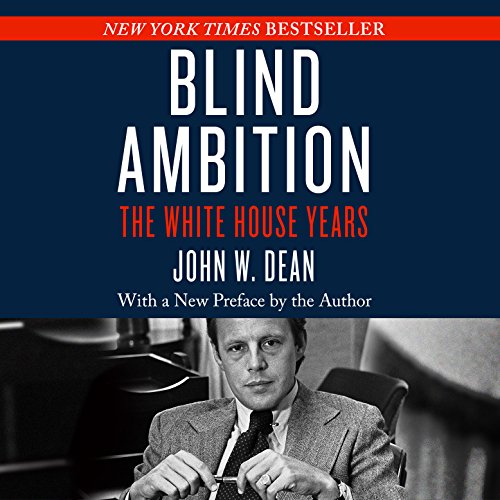 This New York Times best seller is an insider's account of the fall of Richard Nixon, and has remained an indispensable source into Nixon's presidency. Blind Ambition is an autobiographical account of a young lawyer who accelerated to the top of the Federal power structure to become Counsel to the President at 30 years of age, only to discover that when reaching the top, he had touched the bottom. Most striking in this chronicle is its honesty. Dean spares no one, including himself. But, as Time noted, Dean survived, despite the opposition of powerful foe, because he had no false story to protect and he had an amazing ability to recall the truth.

Pitch-perfect as a lawyer's eye-view

I've read a few Dean books and I like the way he processes reality, and explains it. I could see an actual lawyer at each of these junctures making similar calls and ending up in this particular alley-with-no-exit. But of course there was, and is, an exit -- throwing oneself into the arms of prosecutors and, after some touch-and-go incarceration time, the classic DC exit: a book contract. Dean played it pretty well at every point, all things considered. He was a cat in a very wild jungle that landed on cat feet, if a little erratically mid-air on the way.
I like his admission of alcohol overuse, though I think he soft-played the early playboy life discussed by other authors (all being hearsay, from here). This is Dean's brief on his own behalf, as half a dozen other players were to produce. (Only in the parallax of several can I hope to glean some ultimate factual record.) Meanwhile, this is a masterclass on life at the political top as perceived by a sharp-eyed lawyer. My own lawyer-litigation experience, including the portraits of various personalities found there and various tactics of all players, rang true. I like Dean's appraisals of the motives and strategies behind the words and gestures of the (now infamous) characters. For the cool-as-iced-tea Dean, bits sound perhaps whiny and self-pitying, until one immerses in the scenes and uncertainties where he found himself. Even he could be shaken and stirred.
Unexpected bits include: (1) Chuck Colson as a funny, clever guy, even after being caught, jailed, and having his Christian conversion (I'm not sure in what precise order; I'll have to catch his memoirs next; no wonder Nixon liked him so much!); and (2) half-coincidentally, as I've been checking out the later Howard Hughes story, a wrap-up with Dean's conjecture on why the break-in happened, involving Howard Hughes. USA keeps generating indelible colorful/errant personalities and linking them oh so weirdly! We have always had wild disparities in outcomes and unexpected second acts, and we still do.

We know how Dean presented his material

The light hearted sing song voice and reading are so totally in contrast with the careful, pedantic, monotone, that those of us who listened real time to replays of Watergate on PBS, is the almost certainly the "tone and voice" in which he wrote this book.

I wonder why the reader thought that a sing song casual voice is appropriate or accurate to the material or the real voice of the author. He was a lawyer. He parsed his words. Has not an actor he did not color his words.

Though she is barely mentioned, Dean's wife, Moe who like so many politician's wives, like Pat Nixon, and so many others have to stand or sit stoically, frozen in time as space as a visual support for 'their man" but totally dehumanized. Their story is never told, even by their own husbands.

By voicing it like a child's book. It was written by an adult man and is material with geat gravitas and should have been read as such.

I watched the whole Committee hearing and Dean's testimony on PBS at night. It was both fascinating and appalling. I also read many of the books that came out at t he time including Blind Ambition.

Preoccupied, just getting my footing asvan adult, Watergate settled in my memory as a national tragedy. Names of key players were a jumble of familiar sounds and, oh, there are so many names. While listening, I found it helpful to pause and quickly search the Internet to learn a person's significance. The Reader's vocal variety made this production engaging and worthy of my investment.

A must listen for all Watergate students

I read the book many years ago, and listened to it after years of reading many other Watergate-related books. It was written at a time when access to the Nixon tapes was not yet available. Dean's memory proves extraordinary and the decades of research since only prove it. His account was contemporaneous and reads as such.

Hero to some, villain to others, Dean has rehabilitated himself as an astute observer of US politics. His more recent books are well worth reading, too.

Would you consider the audio edition of Blind Ambition to be better than the print version?

It's a great book, but unfortunately the narrator doesn't know how to pronounce the names of some of the principal characters - for instance, Judge John Sirica he pronounces as "CYR-i-cuh" rather than the proper "sur-IH-cuh". Gets very distracting.

Dean Testifies, But the Reader Steals the Show

John Dean’s account of his own role in Watergate is interesting, if pretty self-serving. To his credit, he paces the book really well and writes in a straightforward style that moves the narrative along effectively. Intentionally or unintentionally, his tendency to explain and justify his motives for doing what he did (as evidenced by the title), cause you to root for and against him from chapter to chapter. If there is one thing I could point out about this book that stands out to me, and is the reason I am writing this, it's the reader. Readers seem to be a very subjective part of audiobook reviews but this one is exemplary, in my opinion. I would give him 6 stars if I could: logical, measured, and a little sanctimonious, he owns the voice of John Dean. For fans of watergate history and 20th century American history I would argue this is a must read (or listen).

Yes, I thought Dean's story was revealing and understandable. His story showed how easily one can be pulled in the wrong direction before he realizes he is in deeper water than he can handle. And then being smart enough to try and protect himself by getting a lawyer and being evasive with Nixon when asked to sign a resignation.
I really feel Dean was as honest as possible in telling his story and I could feel the anxiety he must have gone through. I lived through that time and remember him as being rather a scapegoat.
This is a story well worth listening to if you are interested in this period of history.

Very Good, Appropriate for this Era

My mom was somewhat obsessed with the Watergate Scandal, and I am intrigued to learn the facts associated with these names that have rattled around my brain since childhood. This book is very detailed and satisfying. It is, of course, all from John W Dean's perspective, and therein lie both the strengths and weaknesses. On one hand, the book is coherent and emotionally rooted in the experiences of one person. On the other, of course, we see John Dean through his own lens (and our views of ourselves are rarely accurate in the empirical sense). However, I thoroughly enjoyed this audiobook. For a book written 40 years ago, the details and framing do not feel dated in the least. An interesting aspect of any history of Watergate is the technology, and this book has an efficient approach to descriptions of the phone, recording, and documentation tech that speak of the age but are not mysterious to the listener in the digital era. In addition, the way momentous events just tumble after one another (Pentagon Papers, Third Rate Burglary, Saturday Night Massacre, etc) make it quite the page turner. A contemporary viewer knows what happens next, but it's still suspenseful in the telling.
The narrator's performance is somewhat without affect, and I differed numerous times with his choice of sentence emphasis. But it definitely grew on me and I think it is fine; especially in view of the famously monotone delivery of John Dean's senate testimony. Ultimately, this was a great listening experience, and if you are remotely interested in political history, it will be time well spent.

Required reading to understand what happened during the Watergate era. Dirty tricks were afoot back then, too.