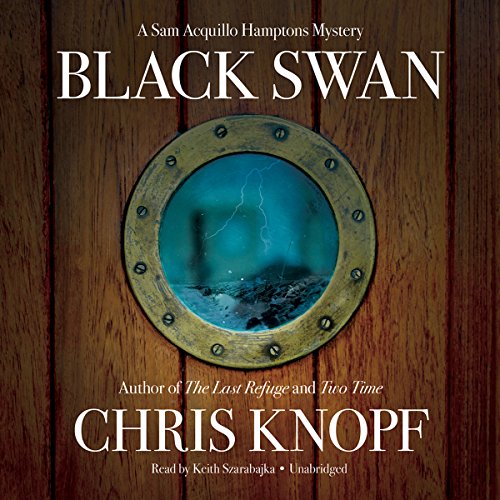 Sailing back from Maine, Sam Acquillo, his girlfriend, Amanda Anselma, and screwball mutt Eddie Van Halen get blown off course by a dangerous gale. With damaged boat and frayed nerves, they limp into the closest harbor, which happens to be on Fishers Island, New York, a distant and altogether disassociated scrap of Long Island.

A summer preserve for the oldest old money in America, it is defended by year-round denizens who safeguard their island’s insularity with xenophobic fervor. Sam and Amanda are hardly welcomed with open arms, unless they’re the arms of the young and beautiful Anika Fey, daughter of the owner of the Black Swan, the island’s only hotel, who’s only too eager to fold Sam into her embrace.

But feminine wiles aren’t the only hazard faced by Sam and Amanda. They’re soon swept up in big-money intrigue, dark conspiracy, brutality, murder, and the machinations of high-tech millionaires, to say nothing of the autumn storms that lash the island with wind and wave.

In the years since losing everything, Sam has fought his way back to an existence that even he believes is worth preserving. And now, bad timing and a broken rudder could result in the greatest loss of all - his life.

“The vivid descriptions of an angry sea and the monster storm that strikes the island fairly dwarf the human threats facing Sam and Amanda.” ( Publishers Weekly)

There's a lot to like about this story by Chris Knopf. There's the "locals versus wash-ashores" conflict. A good dose of steamy sexual tension. The mysteries of brilliant minds. Man versus nature on a few levels. And a good old-fashioned mystery to unravel. One of his most satisfying reads to date.

narrator or story? or both?

i haven't yet met a chris knopf book that i didn't like. this story - which is definitely reminiscent of Key Largo - starts out with a nautical nightmare. but it never really is explained why Sam Acquillo is drawn into to this mystery. even as it plays out, Sam himself questions his motives, but never explains the why. i've been drawn to all previous Knopf's books as his main characters and the quirky buddies that accompany him along the way are entwined at some point with the "mystery".

further, Keith Szarabajka's voice sounds to me too much like Richard Ferrone's voice (narrator of two of the more recent Acquillo audio books) so it became distracting to me as the performance sounded like Ferrone's but was not quite the same, and seemed rushed and flat. i will read/listen to it again down the road as i would prefer to give this wonderful writer a higher rating. it could just be that it was the combination of the story and the narrator made it difficult for me to engage entirely. if you are a fan, definitely don't pass this one by. if you are a first time Acquillo reader definitely start with the earlier books. And don't pass up the Jackie Swaitkowski Hamptons books. I'm listening to Bad Bird right now and it is definitely a 4 star listen.

I am a big fan of Chris Knopf - Sam Acquillo and Jackie Swaikowski - but this was just an annoying book to read. at some point I realized I simply didn't care who did what and where they where when - didn't grip me. Completely different from other Acquillo books which I can't stop listening to, or reading, until they are done.

If you have a computer background, you will be even more interested. However, that is not necessary to the enjoyment of the book.

The change again of the reader was distracting, why 3 different readers for 5 books? Also the story line was weak. There was no background of why he was sailing the boat just a brief aside. The whole story left me flat.