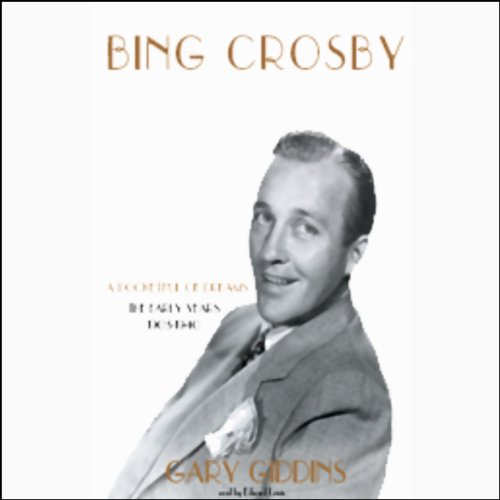 In his commanding biography, the eminent cultural critic Gary Giddins takes us on the remarkable journey that brought a provincial young law student from Spokane, Washington, to the pinnacle of the entertainment world. Giddins chronicles Crosby's rise from college minstrel shows through vaudeville; from Paul Whiteman's orchestra to matchless success in Hollywood; from his courtship of the beautiful and tragic Dixie Lee to his triumphs as the sportsman who created the first celebrity pro-am golf tournament and helped build the Del Mar racetrack.

Written with the critical insight and stylistic mastery readers have come to expect from Giddins, this definitive biography rescues Crosby from mythographers and debunkers alike. Drawing on hundreds of interviews and unprecedented access to numerous archives, Giddins dramatizes the ascension of pop and firmly reclaims Crosby's central role in American cultural history.

I love Bing but found this challenging in parts.

I love Bing Crosby's films and music but found the first half of the book very difficult to get into. I think it was because I found the narrator to be quite robotic so it lacked some 'life' I have heard in other books. That said, I got used to it and it was ok for the remainder and I'm sure if I listened again, it would be better still.

With regard to the book, it is very detailed and really provides a look into the life of Bing. My favourite part was the last chapter because it related to Bing's relationship with Bob Hope. I just wish that this part was a little longer.

If you are a Bing Crosby fan then this is a must read although please give the narrator a chance should you find him difficult to listen to as I did initially.