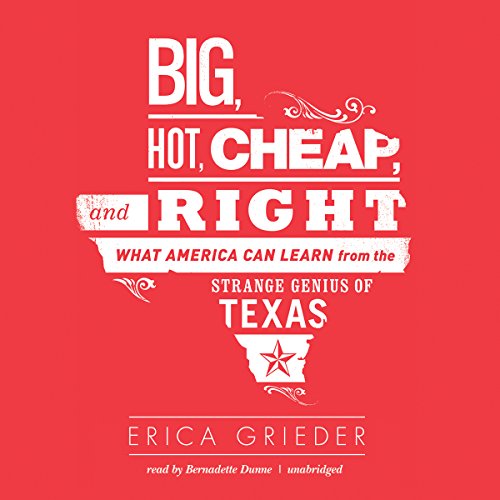 Texas may well be America’s most controversial state. Evangelicals dominate the halls of power, millions of its people live in poverty, and its death row is the busiest in the country. Skeptical outsiders have found much to be offended by in the state’s politics and attitude, and yet, according to journalist and Texan Erica Grieder, the United States has a great deal to learn from Texas.

In Big, Hot, Cheap, and Right, Grieder traces the political history of a state that was always larger than life. From its rowdy beginnings, Texas has combined a long-standing suspicion of government intrusion with a passion for business. Looking to the present, Grieder assesses the unique mix of policies on issues like immigration, debt, taxes, regulation, and energy, which together have sparked a bona fide Texas miracle of job growth. While acknowledging that it still has plenty of 21st-century problems to face, she finds in Texas a model of governance whose power has been drastically underestimated. Her book is a fascinating exploration of America’s underrated powerhouse.

©2013 Erica Grieder (P)2013 Blackstone Audio, Inc.
Ideologie e dottrine Politica e governo Stato e locale
Mostra di più Mostra meno
“Thirty years from now there’s a good chance that most of America will look like Texas and somehow, improbably, using some strange dark prose magic, Erica Grieder has managed to convince me that might actually not be so bad. Written with verve and nuance, this is a fascinating, provocative read. If there were a book like this for each state I’d read every one.”—Chris Hayes, MSNBC host and author of Twilight of the Elites
“Texas isn’t the uninhabitable right-wing bully East Coast howlers imagine and it’s not the open range paradise described by free-market myth-makers. Erica Grieder describes the state as it is—a place shaped (and misshapen) by its past and by the entirely human characters who live there. She is a sure-footed guide, pointing out what is to be admired and warning when we had best watch our step.”—Bill Bishop, coauthor of The Big Sort: Why the Clustering of Like-Minded America Is Tearing Us Apart
“Journalist Grieder (a senior editor at Texas Monthly and former Southwest correspondent for the Economist) pens a primer on Texas that is serious and lighthearted in turn…Anyone curious about or proud of Texas will find something of interest, as will readers of current politics.”—Publishers Weekly

What did you love best about Big, Hot, Cheap, and Right?

I moved to Texas just in the last year and this book gave me a fantastic overview of the state, its politics, economics and unique sensibilities. The book also offers fascinating historical context that amplified my understanding of contemporary issues.

only gave 1 star because can't review without it.
The is just another negative left piece bemoaning self reliance. Seems like the author is envious of others well earned achievements.
I think it was one of those free downloads.

An introduction of Texas

Texas seems contrary to the mainstream media’s world view. This books provides a glimpse on why Texans view on business, and other issues differ from other big states such as California and New York. Despite the state voting republican in recent elections, business and entrepreneurship played a significant role in the state. Overall this book is a good book on understanding how Texas came to be for any person wondering what makes Texas different.

Excellent to be partially informed... From Left of Center perspective... I mean that genuinely. Now on to complete the picture.

I've lived in Texas for 20 years. It's wayyyy better than all the messed up democratic states.

The author has a deep misunderstanding of Reconstruction, history of horses in North America, and Economics.

Texas ye, this POV no.

Author had a great subject to work with. Unfortunately her political POV began to seep out of her story. For instance, what other medical services doe Planned Parenthood provide beside abortions? Only recently has it began listening STD testing and cancer screening. Abortion is its major product.

Found it to be very high handed

It was ok if you do not mind a person talking down to you constantly.