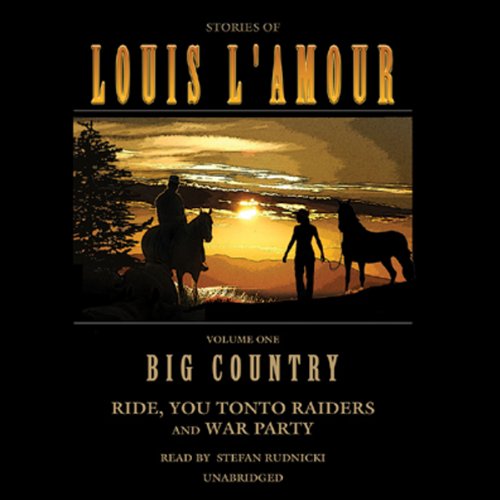 Louis L'Amour said that the West was no place for the frightened or the mean. It was a "big country needing big men and women to live in it". The two stories in this collection provide a good sample of the kinds of people he had in mind.

In "Ride, You Tonto Raiders", Matt Sabre is a young gunfighter who shoots a man who forces him to draw. To his surprise, the man on his deathbed gives him $5,000 and begs him to take the money to his wife, who is alone defending the family ranch. Guilt, regret, and wanting to do the right thing lead Matt Sabre to make that ride.

In "War Party", a boy on the brink of manhood, a resourceful frontier woman who has beauty as well as fortitude, and a strong male character come together in this powerful, romantic, and strangely compelling vision of the American West.

Stories With A Story To Tell

2 short stories with substance. The first story "Ride, You Tonto Raiders" is so well written you don't feel as if you're missing anything, although it's only about an hour and a half long. The second story "War Party" is shorter, but has a lot of substance, lessons to learn, proving the saying, "no good deed goes unpunished" by narrow minded people.

The story was well read by Stefan Rudnicki.

A great couple of short stories to enjoy

Part 1/3 of the Big Country series offers a strong woman,a son and the mix of families on a wagon train heading west. It’s classical L’Amour

The stories are really fine, well organized and researched, as are most all of Mr. Lamour's tales. The only problem with the performance is that the second tale is partially narrated in low, quiet tones that make it a bit hard to hear if listening while on the road. Other than that, both are excellent.

This is a good short western . There is two stories . Stefan Rudnicki is a good narriater.