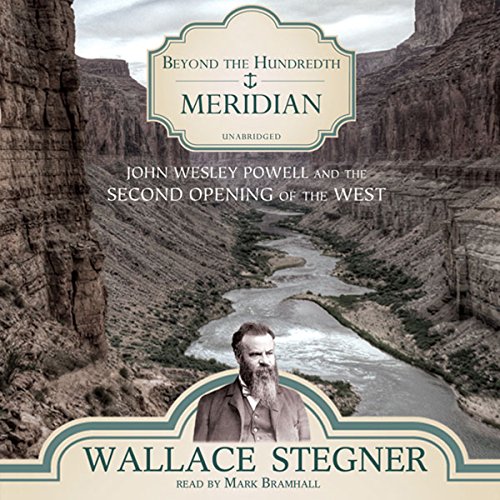 Beyond the Hundredth Meridian

Pulitzer Prize winner Wallace Stegner recounts the remarkable career of Major John Wesley Powell, the distinguished ethnologist and geologist who explored the Colorado River, the Grand Canyon, and the homeland of the Southwest Indian tribes. This classic work is a penetrating and insightful study of the Powell’s career, from the beginning of the Powell Survey, in which Powell and his men famously became the first to descend the Colorado River, to his eventual expulsion from the Geological Survey.

In masterful prose, Stegner details the expedition, as well as the philosophies and ideas that drove Powell.

©1954 Wallace E. Stegner (P)2010 Blackstone Audio, Inc.
Avventurieri, esploratori e survival Scienza e tecnologia Mondiale Stati Uniti
Mostra di più Mostra meno
"Stegner's most exciting work." ( San Francisco Chronicle)
“The surrender of self-righteousness would be an enormous boon to the environmental cause. Acknowledging the unedited, complicated, utilitarian John Wesley Powell as an ideological parent would be a big step in that laudable direction, and it is this step that Worster's thorough and empathetic biography makes possible.” ( Los Angeles Times)
“No library of western/southwestern materials can be without this book…” ( Books of the Southwest)

The long views of John Wesley Powell have had a profound effect on our American lives through his work with the Smithsonian and the creation of the USGS. The powers of greed and avarice did their very best to destroy him and pretty much succeeded. Yet, his legacy has endured in spite of the intellectual midgets of his day.

This book was copyrighted in 1953&1954. I have been aware of this book for years and regret taking so long to finally get to it.

5 stars across the board for Wallace Stegner and the exacting work in critically chronicling the life of John Wesley Powell.

Not for the casual reader.

This book is not for the casual reader, but is a delight for anyone interested in John Wesley Powell, exploration of the West, or the history of western land and water policies. Stegner is a great story teller. He gives a more nuanced explanation of Powell's exploration of the Grand Canyon than Powell himself does. Of even more interest to me was the story of Powell's career with the Geologic Service and his insight into the problems with western settlement into the "arid lands". Powell was a keen observer and was a true scientist who dealt with observable facts as opposed to the "boosterism" of western congressmen and developers. It is worthwhile reading this book just to compare Powell's observations to today's problems with water policy.

Would you consider the audio edition of Beyond the Hundredth Meridian to be better than the print version?

Have you listened to any of Mark Bramhall’s other performances before? How does this one compare?

Perfect and I mean PERFECT for a south-west road trip! A little slow to get into, the reading can be a bit slow but once you get into it it is enthralling! I played several chapters multiple times over several road trips.

When will we ever learn

The more things change, the more they remain the same. Still and again there is denial of scientific fact and evidence in the formation of national policy, as in the day of John Wesley Powell.

A broad and deep picture of a visionary man who's impact while not fully realized within his lifetime helped to create the blueprint of many of our current institutions. A life fully examined in frequently beautiful prose, it reveals a richness and clarity worthwhile to any reader interested in how post civil war America evolved, warts and all.

My best college buddy and I recently toured the lower half of Utah on a geocaching mission and she had read this so I decided to read it too. The descriptions of Utah are phenomenal. I love this quote regarding the new lands act..."the greatest good for the greatest number for the longest time." I could probably read it again and get a lot more from it--and these aren't the kinds of books I typically read.

Good account of Powell's two exploratory trips down the Grand Canyon when almost nothing was known.

Would you recommend Beyond the Hundredth Meridian to your friends? Why or why not?

The book is too long winded and bogs down in Powell's political life, after his explorations.

Into the Depths of the Unknown

Excitment followed by a slow slog

The first few chapters describing Powell first descent are incredibly well written and exciting but then Stegner turns his descriptive prose to a discussion of the ethereal beauty and geography of the plateau country. For those who delight in details, the time may be rewarding but for me, it goes on far too long.

Would you listen to Beyond the Hundredth Meridian again? Why?

What was one of the most memorable moments of Beyond the Hundredth Meridian?

The entire story about Powell's impact on American Indian ethnology.

Have you listened to any of Mark Bramhall’s other performances before? How does this one compare?

This is an important book to read (listen to) for anyone interested in Grand Canyon, JW Powell himself, the exploration of the SW, and matters related to non-indigenous movement into arable lands of the SW.

Tracing the Meridian of the Environmental Movement

This is an important work for the origins of the environmental movement as testified to by Mr. Stegner. All who enjoy wilderness and western history should appreciate this work as well as those interested in post civil war federal politics and bureaucracy.