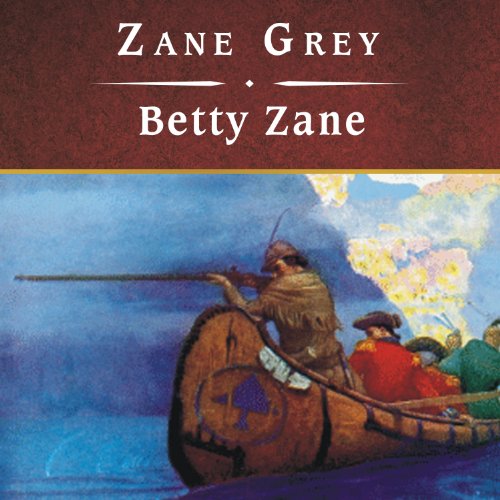 Betty Zane is the story of the first settlers in the Ohio Valley, and their fight for survival during the Revolutionary war. The British have organized and incited the various eastern tribes to attack American 'Rebels' in this lesser known theater of the war.

Betty is a fiery beauty, who's quest for romance with Alfred Clarke is interrupted time and again by Indian raids and battles. In an unexpected twist, it is Betty, who turns the tide at the final battle of Fort Henry.

Inspired by the life and adventures of his own great-great grandmother, Betty Zane was Zane Grey's first novel. This and the other two books in the "Ohio River Trilogy" his are considered some of Grey's best work.

After a period of minor league baseball, the establishment of a dental practice, and the settling of a rare paternity suit, the unhappy Zane Grey published a novel called Betty Zane. It was 1903 and this was the first of around 100 Grey books - and as many film adaptations - to come.

While Grey is primarily known for his westerns, Betty Zane, ponderously performed by Michael Pritchard, is a historical romance based on the real-life adventures of his own great-great ancestor, a heroine of the American Revolutionary War named Elizabeth Zane. Set in the Ohio Valley and featuring the Battle of Fort Henry as a turning point, Betty Zane tells the story of a fearless young woman falling in love and fighting Indians.

How did I miss this?

I have never read any of Zane Grey's books in my over 50 years. However, I purchased his "border" trilogy, detailing and dramatizing his ancestors in the 18th century Ohio Valley. GREAT TALES! Rivals "Drums Along The Mohawk" and Kenneth Robert's "Northwest Passage." Tactically and techincally sound enough to impress this former Marine and Army Special Forces soldier. Read them all!

Great Book , I Love it

I Just Love his work, another book I will listen to over and Over.

Exciting to the end!

The narrator is perfect for this story. I love this author's work and this does not disappoint. Looking forward to the next story.